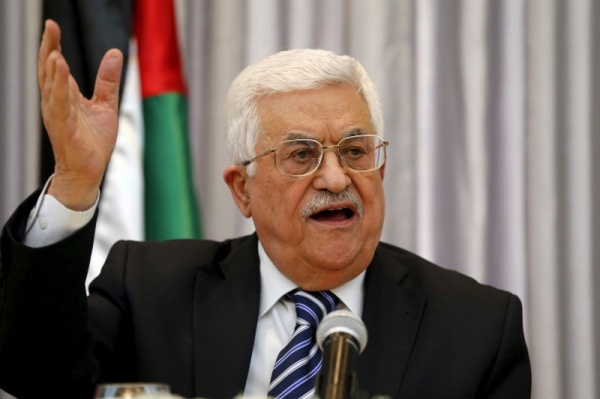 This was edited and published in the Jewish Press, but this is the original version:

President Mahmoud Abbas addressed his Palestinian National Authority (PA) recently, in a speech broadcast on Palestinian Television. Rather than addressing the problems facing his citizenry, the lack of democratic governance exemplified by a President in the thirteenth year of his four-year term, or even the conflict with Israel, he turned his attention to history’s favorite target: the Jews.

Abbas asserted that hatred of Jews in Europe was “not because of their religion, but because of their… usury, banks and so on.” He denied the long history of bigotry and violence against Jews in the Arab world, and used this lie to “prove” that Jews were never hated “just for being Jews.”

He termed traditional Jewish prayers for Zion a “narrative” which we are “tired of hearing.” He insisted that Israel “is a colonialist enterprise, aimed at planting a foreign body in this region.” He revived the canard that Ashkenazic Jews come from the province of Khazaria: “And those are Ashkenazi Jews,” he said, “which means they are not Semitic and have no relation to Semitism and have nothing to do with the prophets Abraham or Jacob.”

By dredging up the traditional tropes of Antisemitism, Abbas inadvertently did the civilized world a great service: unmasking the true nature of the “new” stories his PA tells today.

For the record, I am no “Zionist,” in that I do not share Herzl’s delusion that taking the Jews from Europe to Israel would eliminate Antisemitism. Many of Israel’s government decisions are irrational and bureaucratic; occasionally they are dangerous.

What I am is a Jew and a Rabbi, who has studied anti-Semitism as understood by our leaders and teachers throughout history. No, I do not mean university professors who struggle to provide a rational basis for a fundamentally irrational hatred. Like attempts to express an irrational number as a fraction, those explanations collapse the more closely we look.

This is because hatred of Jews finds a new facade to fit each new era, a contemporary rationale to mask the ancient hatred beneath. Abbas’ mistake was to refer directly to earlier eras, connecting yesterday’s obvious lie to today’s “truth.”

Today’s facade is “Palestine,” the Arab homeland which the Jews are occupying and stealing from its owners. This is a Palestine which claims no Israeli Jew may live within its borders, yet calls Israel the “apartheid” country as it foments a “resistance” comprised of murdering Jewish civilians.

What is Palestine? Let us examine seven basic truths.

1. It is a Roman name steeped in bigotry and ethnic cleansing. As the Romans murdered and exiled the Jews from their homeland, they renamed Judea because of its obvious association with Jews. Arabs say Falehsteen because Arabic has no phoneme for a “P” sound. Yes, you read correctly: “Palestinian” Arabs have no name for their purported homeland pronounceable in their native tongue.

2. From the Romans in the year 70, to the Crusaders of the 11th Century, to the Arab massacre of Hebron in 1929, Jews have never left their homeland voluntarily and have always returned. During the past 2000 years, Palestine has been home to some of the foremost Jewish scholars, many renowned even by non-Jews today: Maimonides of the Guide to the Perplexed, Rav Yosef Karo who authored the Code of Jewish Law, and the Kabbalist Rabbi Yitzhak Luria (the Ari Zal) all moved to Palestine during their lifetimes. There is even a Palestinian Talmud. The longing for Zion derided by Abbas is no modern political movement, but a fundamental tenet of Judaism.

3. This fact was known to all who invaded or migrated there. The Arabic name for Jerusalem, Al-Quds, is an abbreviation of Bet Al-Maqdes, “The Holy Temple” (in Hebrew, Bet HaMikdash). Over 60% of Jerusalem residents were Jews in 1896, prior to the formation of the Zionist movement. The 1938 Flag of Palestine in a French Atlas consisted of equal panels of blue and white, with a six-pointed gold star in the center. The “Palestine Post” changed its name after Israel’s Independence in 1948 – to The Jerusalem Post.

4. Palestine has never been an independent Arab country or community, nor has Jerusalem ever been an Arab capital. On the contrary, “Palestine” was the target of the Arab boycott when it started in 1945. The PA flag, a derivation of that used by dozens of past and present Arab nations, was previously the flag of the short-lived Federation of Iraq and Jordan – in 1958.

5. Although every indigenous people’s homeland differs significantly from modern political borders (even in England and Scotland), the PA’s “Palestine” traces precisely that area of British mandatory Palestine that is today Israel. No Lebanese, Egyptian or even Jordanian territory is claimed; neither is an inch of ancient Israel left to the Jews.

6. The website of the Palestinian Authority declares: “today’s Palestinians are direct descendants of the Arab people and share their culture, language and history.” Not coincidentally, these are the three measures by which anthropologists distinguish distinct peoples. Mahmoud Abbas said in Jordan that “we are one people living in two states,” while Hamas leader Fathi Hammad declared on Egyptian television that “half of the Palestinians are Egyptian, and the other half are Saudis.” The Peel Commission of 1937 determined that “Arabs living both east and west of the Jordan River had ties of kinship, language and culture with the Arabs in surrounding countries.”

Zuheir Mohsen, then-leader of the Palestinian Liberation Organization’s Pro-Syrian Faction, said bluntly in a 1977 interview: “The Palestinian people do not exist. Between Jordanians, Palestinians, Syrians and Lebanese there are no differences. We are all part of one people, the Arab nation.”

7. The objective of the PLO at its founding in 1964 was not to end an occupation or even to establish a country, but to destroy Israel. Zuheir Mohsen said in the same interview that the “Palestinian identity exists only for tactical reasons… Once we have secured our rights in all of Palestine, we would not postpone the unification of Jordan and Palestine for even a second.”

As Mohsen himself said, and these facts clearly indicate, Arab Palestine exists only to disenfranchise the Jews. True peace can come when the Arab world is able to free itself from falsehood and establish peaceful self-governance on land which Israel would happily give them, using a process it initiated in 1993. To pressure Israel in the meantime, to claim Israel is the obstruction as Arabs pursue false narratives of Jewish theft, greed, and blame for their own murders in lieu of productive development, is not merely counter-productive, but perpetuates an ancient hatred that still plagues humanity.