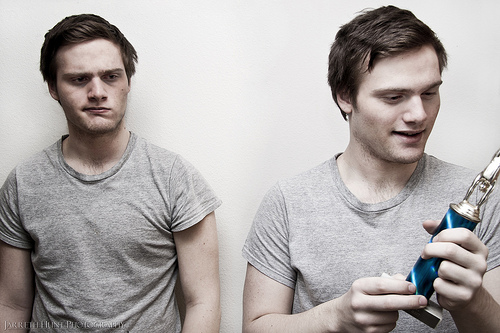 As a typical Jewish child attending a suburban prep school, I lived through the season just concluded with a certain feeling of envy. Most friends and neighbors were celebrating a big, gaudy holiday season, while I and my Jewish friends were left out. They decorated houses and trees, painted shopping malls red and green, and you couldn’t find a station on the dial that wasn’t playing music from earlier generations.

Little has changed, save my attitude. Having learned more about the unique responsibility and privilege of being a Jew, I have nothing of which to be jealous. My own children, growing up with the Jewish education I lacked, also do not suffer the least hint of that envy. We don’t want what they have; we want what is ours.

And it is fortunate that it is so. In the Sayings of the Fathers, our Sages caution us that envy is one of the dangerous traits that “removes” a person from the world. A person consumed by jealousy no longer sees and enjoys the world. He ignores his own blessings, caring only for what someone else has.

The Western Wall in Jerusalem could (and should) be a place of Jewish unity; instead, it has become for some a target of envy. To them, someone else — traditional Jews, whom their leaders impugn as “ultra” Orthodox — have a place for prayer, and they don’t have a place of similar size and prominence. Thus they are jealous — but of what?

Let us step back and be objective.

According to the Pew Research Center, half of Israel’s 6.5 million Jews are traditional or observant. And in another recent survey, the pluralistic Panim organization determined that under 3% of Israeli Jews, or just over 150,000, are affiliated with the American Reform or Conservative movements. Even this is an excessively optimistic figure, given the paucity of liberal synagogues in Israel. But using these numbers alone, it would be excessive for American liberal leaders to demand even 5% of the space afforded to traditional Jews.

And there is another factor. The average Orthodox person prays several times each day, and gravitates towards Jerusalem’s Old City and the opportunity to pray facing the Temple Mount, which Jewish tradition reveres as the holiest site on earth.

The average non-Orthodox Jew, by contrast, prays several times per year. And the Reform movement expressly rejects the Temple Mount as having special sanctity, and calls its synagogues “temples” to supplant it.

The government has thus already done far more than objectively necessary. Since the early 2000s, space at Robinson’s Arch has been available for “alternative” prayer services of whatever kind. Several years ago, then-Religious Affairs Minister Naftali Bennet upgraded the space, creating a new Ezrat Yisrael platform for this purpose.

Usage of that space — or lack thereof — proves the accuracy of the above analysis of need. Whereas the traditional plaza is filled to overflowing several times each year, Ezrat Yisrael has not once been used to capacity, and is rarely used at all.

What, then, explains the demand for a space of similar size and prominence to that used for traditional prayer, given an objective lack of both theoretical and demonstrated need while even the existing, smaller space is left vacant? It defies explanation, unless we acknowledge that envy is a powerful force. “They have it, so we must have it too.”

How much more good would these American leaders do, were they to not increase jealousy but reduce it? Why should Jewish children be left envious of non-Jewish peers celebrating non-Jewish holidays? I’m hardly the first to observe that when someone has a strong Jewish identity and an understanding of our unique national mission — and recognizes our disproportional impact upon civilization and history — it is obvious that we have nothing for which to be jealous.

Rabbi Eric Yoffie, the immediate Past President of the Union for Reform Judaism, has called this “the most Jewishly ignorant generation in history.” The crisis for American Jewry is not 6000 miles away, but all around us. There is so much that liberal leaders could and should be doing to solve this crisis.

Yet Jewish camps are in decline, and the various educational initiatives launched by Rabbi Yoffie during his tenure have long since flamed out. New efforts are clearly and urgently needed. Synagogue attendance will not increase if the rabbi wastes congregants’ time discussing a site that most have never seen. The intermarriage rate will not decline if rabbis do not teach the privilege of being Jewish.

Liberal Judaism in America will not rebuild from its collapse if its campaigns focus upon jealousy. When Jews are bringing “Hannukah Bushes” into their homes in America, to sermonize about Israel is to “fiddle while Rome burns.”

This piece first appeared in the Times of Israel.