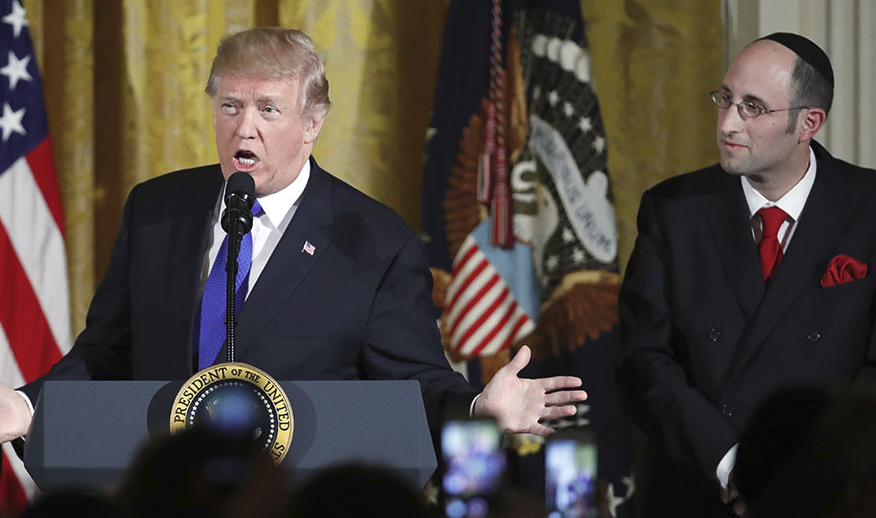 Given the common belief that Jews are liberal, this may come as a surprise to many. But not only do Orthodox Jews (the traditionally observant) have very different political leanings from their more liberal brethren, but they now encompass the vast majority of American Jewish clergy.

Lakewood, N.J. is the home of the largest rabbinic seminary in America and home to tens of thousands of its alumni. In a few square blocks, you'll encounter more rabbis than liberal seminaries have produced in several decades. Lakewood also produced the largest pro-Trump majority in 2016 of any New Jersey town, despite a higher percentage of immigrants, impoverished, and non-whites than most other pro-Trump communities.

Rabbis voted Trump not for financial benefits; it is liberal candidates who support generous government programs. They supported him not simply because of his pro-Israel posture, although he has exceeded expectations with his new, commonsense approach to the right of Israelis to live in peace and security.

Neither did they blind themselves to Trump's failings. They do not support what he said on a bus 12 years ago or appreciate the un-presidential things he says or tweets on a daily basis. They look askance at casinos and beauty pageants and have little patience for "reality TV."

So what is it about Trump that they liked on Election Day, and like even more a year later?

First of all, Trump understands that good and evil remain vibrant in today's world and refuses to point fingers only at those who liberals agree are evil. Charlottesville provided a great example of this phenomenon.

No honest reading of the president's remarks has him calling white supremacists "fine people." This nonsense, so loudly proclaimed in the media, was designed to prevent sober analysis of Trump's true crime: he dared point out that violence and bigotry are not unique to those perceived as "right-wing." This, liberals could not countenance. As Maxine Waters put it, "No, Trump. Not on many sides – your side."

That liberal narrative is both false and profoundly dangerous. Our First Amendment liberties depend upon protection of free speech even for those with abhorrent views. Disruption of opposition events was a Nazi tactic, and had Antifa not violently employed it against the Nazis, we might hardly have heard of Charlottesville.

In the succeeding weeks and months, Antifa repeatedly proved President Trump correct, using force to stifle free speech not from Nazis, but from anyone with whom they disagreed — including Ben Shapiro, the conservative, yarmulke-clad Jew who was the journalist most targeted by anti-Semites in 2016. Trump deserved an ovation for stating that hatred is not a one-sided phenomenon.

The leading belief of anti-Semites is that all Jewish property is stolen; this is something rabbis know from both rabbinic literature and world history. It is why Jews were forced to live in ghettos and barred from most professions during the Middle Ages. It is why the Nazis began with a boycott that declared that Germans should "protect themselves" rather than buy from Jews. And it is why the Arab League co-opted the German boycott, which leftists then renamed BDS (boycott, divestment, and sanctions) to make a "human rights" cause out of economic warfare against Jews living in their ancestral homeland, something visited upon none of those engaged in true, unquestioned occupations of the homelands of others around the world.

Thus, anti-Semitism travels seamlessly between the far right and the far left. It is too real and too dangerous to be wielded as a partisan cudgel.

We already had a president who said Israel is "occupying" Palestinian land and who sat idly while the U.N. called Jewish life in Judea "illegal." Similar language was seven percentage points away from being part of the Democratic platform. The only foreign flag flown inside the DNC was Palestinian, while they burned the Israeli flag outside. That's not about Israel's politics, government, or policy. That's about anti-Semitism.

The Republican platform rejected the "false notion" that Israel is an occupier, and President Trump has unquestionably acted in accordance with those positions. He has a history of trusting visibly observant Jews, and he put two of them, Jared Kushner and Jason Dov Greenblatt, in charge of negotiating peace with Mahmoud Abbas. Their first demand was that Abbas stop funding terrorism. In any other context, this would seem obvious, yet this revolutionary idea entirely escaped previous negotiating teams.

Nikki Haley's indignant, even furious reaction to the U.N. Security Council's attempt to tell the United States where it can put its embassy to Israel was merely her latest verbal fusillade against U.N. bias regarding the world's sole Jewish state. Trump's decision to move the embassy, recognizing that no peace can be achieved that does not recognize the attachment of Jews to Jerusalem, showed that he is unafraid to speak truth to world powers. The administration was far too busy protecting Jewish interests to pay attention to Jewish liberals claiming that Trump was "encouraging" Alt-Right hatred.

And then there is the "big picture" – the underlying vision for the future of America. Western civilization traces its roots to what are called Judeo-Christian values, which trace their roots to a small community of liberated slaves clustered on the Eastern shore of the Mediterranean Sea.

Their Bible sanctified human life and peace, while surrounding countries glorified warfare and considered fights to the death a form of entertainment. They taught that a ruler's power must be limited, that even a king must live within the law. They pioneered universal education, which other cultures reserved for the wealthy. And they valued family and social responsibility while others regarded these as signs of weakness.

Western civilization depends upon choosing biblical values over those of Greeks, Romans, Huns, and Visigoths. This is not a political posture, but reference to our moral foundation. It is a sad commentary that one party seems devoted to tearing down traditional moral norms, expressing the belief that what is new is automatically superior.

Rabbis were guided by rabbinic scholarship and their consciences. We do not look to politicians as role models, and the idea of a perfect human is foreign to Judaism in any case. Rather, an election is a binary choice. Which candidate and which party will better protect innocent lives – our lives – here and around the world, and keep America closer to our core values?

This is why rabbis voted for Trump in 2016 and are yet happier with that choice today.

First published in the American Thinker.