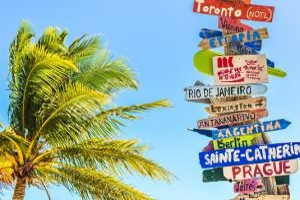 This week’s reading begins with Rivka’s pregnancy, which came about only after many years and many prayers. And then we read a verse which, according to Rabbi Shlomo Yitzchaki himself, begs further explanation: “And the children struggled within her, and she said ‘if so, why am I here?’ And she went to inquire of G-d” [25:22].

First of all, what’s the problem? Different children behave differently in utero. Some move around a great deal, while others are more placid. Women can often tell how their children will behave before giving birth.

So Rivka’s baby moved around a lot. Admittedly, a child like that is likely to be somewhat more taxing (and that may be an understatement). But this is not, to use the expression, “the end of the world!” So why does she say “if so, why a why am I here?”

Second question: where did she go? G-d fills the world, yet the verse says “she went to inquire” of Him.

And what is the answer she receives? “And G-d said to her, ‘there are two nations in your womb, and two peoples will separate from within you; and the one will be stronger than the other, and the older will serve the younger'” [25:23]. They are two brothers, and they will not get along. One will bully the other, she is told. And she is reassured and goes home, and indeed eventually gives birth to twins.

This, then, is the reassuring answer, that they are brothers who won’t get along?

Our Sages explain that what Rivka perceived was not “conventional” movement of a baby. There was a House of Study, dedicated to understanding G-d, led by Shem the son of Noach, and his great-grandson Eyver. And any time that Rivka went by this House of Study, she felt her baby (not knowing that there were, in fact, two babies) trying to get out to go study with them.

But by this time, there was also a great deal of idolatry in the world. And every time she walked by a house of idolatry, she also felt her baby trying to get out, to go worship the idols!

It was to the House of Study of Shem and Eyver to which she went to seek guidance. And that is where she learned that she was going to have twins.

Our Rabbis say that what bothered her so much was that her baby appeared to be pulled in every direction. He or she wanted to simultaneously serve G-d and serve idols. And the consolation was, these are two different children, each of whom is naturally drawn in one direction but not the other.

This was a consolation, they say, because then one could hope that the child naturally drawn to idolatry would nonetheless defeat this inclination and serve G-d. But if he didn’t perceive that idolatry and service of G-d were different and mutually exclusive, then he was lost at a much more fundamental level.

Unlike babies in the womb, we have within us both good and evil inclinations. We are all, in our lifetimes, drawn to both sides — and every person, on his or her level, sometimes makes the wrong choice. But our very first task is to know that there is indeed a choice to be made, that some actions are superior than others. The Torah tells us how to discern between them. And then, we must take stock. We must know in what direction we are going, rather than allow ourselves to be lost in our daily affairs. That will enable us to change for the better.

Our goal is to grow. We must attempt to become more G-dly, and bring more G-dliness into the world through our actions. If we are “all over the place,” lost in a cloud of good and bad behaviors, then indeed “why are we here?” We must take stock of our actions, choose our direction, and pursue the good. Then the bad will be subjugated to the good, even if the bad appears to be “greater,” dragged to the House of Study to be elevated and purified.