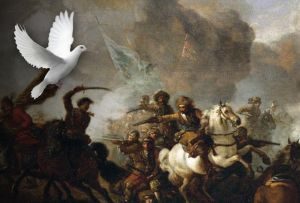 Our reading begins with Yaakov returning to the land of Cana’an, re-encountering his brother Esav after several decades of separation. This was, however, no ordinary family reunion.

After Yaakov received his father’s blessing intended for Esav, Esav decided to kill Yaakov. It was for this reason that Rivka, their mother, advised Yaakov to run to the house of her brother Lavan [27:41-43] Rivka told Yitzchak that she wanted Yaakov to marry a non-Canaanite woman, and thus Yitzchak sent Yaakov there to marry Lavan’s daughter [27:46-28:2] — but this was engineered by Rivka to save Yaakov’s life.

Now, Yaakov is returning. Will 34 years of separation have placated Esav, or will he greet Yaakov with murderous intent? Yaakov was afraid, and sent messengers ahead with gifts for his brother “to find favor in your eyes” [32:6]. To which Rashi adds, “for I am at peace with you, and request your love.” Yaakov did not want to fight, he wanted peace.

Yet we also learn that Yaakov divided his caravan into two camps — so that at least half would escape if they were attacked. Rashi quotes the Medrash which says that Yaakov prepared himself in three different ways: with gifts, with prayers, and with preparation for war.

Modern day pacifists would claim that two of these things were contradictory, that one cannot simultaneously claim to want peace while arming for battle. Our Sages say, “the stories of the fathers are signposts for the children.” On the contrary, sometimes being well prepared for war is the best way to ensure peace!