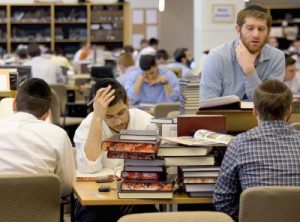 In this week’s reading, Yaakov parcels out blessings to his sons, based upon his prophetic understanding of their futures. He describes Yissachar as a strong-boned donkey, who saw that “rest” was good, yet “bent his shoulder to bear, and became a servant to tasks” [49:14-15].

The commentators universally understand that the tribe of Yissachar devoted itself to Torah study to an extraordinary extent: Rashi derives from a verse in Chronicles that the tribe produced 200 heads of the Sanhedrin, the supreme Rabbinic Court located in the Temple in Jerusalem.

That is but the first of three common threads in the understanding of these two verses. The second is that Torah study is seen as a burden, a monumental task. Rashi says that Yissachar received a fruitful portion of the Land of Israel, yet burdened himself with Torah. The Ohr HaChaim writes that the verse refers to the ultimate rest in the World to Come, leading Yissachar to toil in this one. And the Kli Yakar says that Yissachar was like a donkey tied to its load — his burden was always there.

And third, this task of Yissachar’s performed a critical service for the Jewish Nation. The verse referenced by Rashi (I Chronicles 12:33) is describing King David gathering military troops, yet says: “And of the children of Yissachar, men who understood the times, who knew what Israel should do; their heads were 200, and all their brothers acted on their words.” Torah guides Israel in all its affairs, so Israel’s best strategists were those who studied constantly.

Torah study is not meant to be a relaxing activity — enjoyable, yes, but not easy. Mort Zuckerman, the real estate magnate and editor-in-chief of US News and World Report, visited the famous yeshiva in Lakewood, NJ and called it “the single most intellectually active, energetic, fascinating environment I had ever witnessed.” He even said that Harvard Law School (which he attended) paled by comparison! When we study Torah, this must be our goal — to immerse ourselves, for our minds to be completely engaged with the material.

The phrase “became a servant to tasks” actually refers to “mas,” a tax. The Ohr HaChaim reads “servant to tasks” as applying to the rest of the Jewish nation, rather than Yissachar — meaning that everyone had to “tax themselves” to support those studying Torah, as the tribe of Zevulun did for Yissachar. “And so in every generation,” the Ohr HaChaim concludes, the rest of us claim a portion in the continuation of Torah scholarship, ensuring the Jewish future, by supporting schools and scholars.