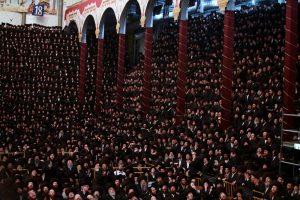 Whatever it was that I wanted to say about Stephen Cohen’s “Lessons Learned From Orthodoxy’s Dramatic Growth” has been entirely overshadowed by Rabbi Gordimer’s marvelous essay. Although I might have tried to be more generous (halevai more non-Orthodox Jews would “pay the PRICE” and stay that much more involved for another generation), Reb Avrohom is unquestionably correct both that “the qualitative returns of such [non-Orthodox but heavily-involved] cases are far, far lower,” and in his explanation of why this is so.

Some of the comments to Rabbi Gordimer’s piece indicate, though, that my own thoughts on Prof. Cohen’s article are still relevant.

I’m not quite sure how Rabbi Gordimer could possibly be called “triumphalist” — he merely had the temerity to explain why the Orthodox are growing at an astounding rate. One can hardly fault him for terming the data “jaw-dropping,” as there are few more accurate adjectives with which to portray it. A veteran analyst of Chasidic demographics, himself the father of over a dozen children, refused to believe the results of Marvin Schick’s 2014 Census of Jewish Day Schools until I prevailed upon Dr. Schick to send him a copy. And who could blame him — what school system doubles in size in a 15-year period, as Chasidic schools did between 1998 and 2013? The fact that Jews were abandoning Torah observance earlier in the twentieth century only further accentuates the phenomenal success of the educational model now in use across the Orthodox community.

When we talked about exponential growth twenty-five years ago, no one said we were being “triumphalist” but rather “unrealistic.” I recall a Reform Rabbi confidently rebutting me with numbers from the first National Jewish Population Survey (1990), which showed that the Orthodox were consistently less than 7 percent of the Jewish population. The boom that was already quite evident within our community — the blossoming of Jewish communities in Brooklyn, Lakewood, Monsey and elsewhere — coincided with the passing of an elderly cohort of nominally-Orthodox Jews, who self-identified as Orthodox based upon synagogue preference rather than solid commitment. Thus the Council of Jewish Federations spent millions of dollars in order to entirely miss the coming transformation of American Jewish life.

Today, the dividing line in Jewish demographics between Orthodox and Non-Orthodox Jews is so obvious that no statistician can ignore it — the new question is whether others will study our model to see what is working. In that regard, Prof. Cohen deserves kudos for daring to say (from his office at Hebrew Union College, no less) that the Orthodox are doing something right in this specific, critical area, and for suggesting that others emulate our model. Last year, after accepting an article on this very topic from Rabbi Pesach Lerner and myself, The Forward editors read it — at which point they hemmed, hawed, and eventually declined to share it with their readers.

At the same time, we are prone to continue to make the same error that plagued the demographers of previous years — conflating any form of “Orthodox Jews” into a monolithic construct. Rabbi Micha Berger commented that “17% of our children elect to leave the American Orthodox community” but added that “it’s apparently constant across all segments of Orthodoxy.” This number comes from the Pew Survey, and as I said in a previous essay, this figure is “outlandishly high where the Charedi community is concerned.”

We should refer back to Rabbi Meir Goldberg’s comment on that previous essay: when he asked two professionals in Lakewood how many of the over 10,000 teens are actually “OTD,” they said no more than 300, and “the vast majority eventually return.” That means that in Lakewood the “attrition rate” is under 3% and probably under 1%. Similarly, Footsteps, the magnificently well-publicized and well-funded organization helping people abandon Judaism — primarily though not exclusively from Chasidic homes — proudly states that it has served over 1100 people in 12 years. Per the Avi Chai study, Chasidic schools alone produced 55,000 graduates during that period, meaning less than 2 percent are leaving. Footsteps can accurately state the demand for its services is “growing exponentially” because the Chasidic community itself is doing exactly that.

And that is the larger point to take away from both the Pew Survey data and Prof. Cohen’s analysis: that growing numbers of individual problems are symptoms of the success of the overall model, rather than its failure or impending collapse. It only makes sense that the number of OTD teens should be growing, even if that reflects a constant or smaller percentage of a rapidly-increasing teen population. Certainly, the community has vastly more resources to help these children, as well as those with learning disabilities, medical conditions and other issues — because a larger community means a larger number of children evidencing any of these problems.

I would argue that even Open Orthodoxy is evidence of the growth and stature of Torah observance in the Jewish world today. A generation ago, adherents of “Open Orthodoxy” would not have hesitated to call themselves right-wing Conservative (i.e. the Union for Traditional Conservative Judaism, which eventually dropped the “C” from its name), while encouraging precisely the same changes in Jewish philosophy and practice. Today, everyone knows that the vibrancy and commitment found within Orthodoxy are not replicated elsewhere — and thus it is important to OO to call itself Orthodox despite its abandonment of basic tenets of Orthodoxy.

I know that some will read this essay, as well, and conclude that I am being “triumphalist.” But again, that’s simply a pejorative reserved for the Orthodox, to be used (as David F commented) whenever Orthodox Jews mention the successes of Orthodox Judaism, and only now that the rectitude of what was said decades ago is obvious to all. No one said Simeon Maslin, then President of what was then called the UAHC, was being “triumphalist” when he said that Reform, and not Orthodox, are the “authentic” Jews. There is no triumphalism in rejecting a pattern of criticizing charedi Judaism and its leaders for their own successes. The Gedolim knew a great deal more than their critics of decades past; that, too, is a conclusion drawn directly from the available data.