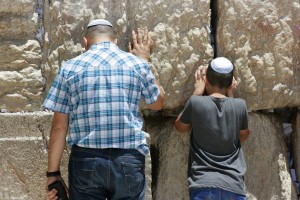 What if I told you there was something you could do, right now, that could save a life in Israel? Would you do it?

In this week’s reading, Yaakov returns to the Land of Israel, only to meet his brother Esav — who years earlier tried to kill him. Yaakov prepared for this event, Rashi tells us, in three ways: with gifts, prayer, and preparation for war. All three were necessary.

Our Sages tell us that “maaseh avos siman l’banim” — the actions of the Fathers are signs for the children. Much of what we learn from the detailed accounts in Bereishis, the Book of Genesis, are principles derived from the accounts of the lives of our forebears, the fathers and mothers of the Jewish people.

Hatred of the children of Yaakov by the children of Esav and Yishmael is hardly new — it has been with us for thousands of years. The modern state of Israel is not facing a new challenge, but an ancient one; the children of Ishmael have aimed to destroy it since before it was created, simply because it is a state run by Jews. Today Ishmael is waging war with guns, knives, and “diplomacy” to gain world support against the Jews (as if that were difficult to garner).

Yes, we have to prepare for war, and fight back with diplomacy as well. But the Jews have a secret weapon: the Creator of Heaven and Earth is ready to help us.

Recently someone called my attention to a webpage (anti-Semitic, of course) purporting to translate content of the Talmud, to the effect that Judaism teaches that a non-Jew is not a human being, but rather a beast. It was a complete inversion of reality; the Talmud states that “the Righteous of all Nations have a share in the World to Come” [Sanhedrin 105a]. An animal cannot choose to be righteous; the Talmud is telling us that every human being has free will, and will be rewarded for making the right choices — and that this applies to every person, whether Jewish or not.

Of course, the “translation” was fictional. The part about non-Jews being beasts was whole-cloth fabrication; the rest, a distortion built upon a mistranslation. The Talmud does not use “Ish,” the word for man. Rather, it says that non-Jews are not called “Adam;” only Jews are called “Adam” [Bava Metziah 114b].

This is not a new anti-Semitic claim; it was used at the Dreyfus trial, when an innocent and loyal French Jewish soldier was accused of treason (in order to cover up the guilt of a pure-blood Frenchman). Several rabbis came from other European countries to support the defense, and they were confronted with this misrepresentation of Jewish teachings.

They explained as follows: Adam is not all of humanity. We are all the Children of Adam, and it is the Jews who brought the message that we are all brothers, all created in the Image of G-d, to the world. But Adam is one person, one body. We, the Jews, are all called “Israel,” the name given by G-d to Jacob — immediately prior to his family reunion with Esau. That is the meaning of being called “Adam” in the singular.

If a French person is hurt, a person of French descent living in another country is unlikely to be affected more than any other human being. But because a Jew was falsely accused, the rabbis explained, we were willing to come from other countries just to support him. That is what is different — all Jews are one. We are one unified body to an extent not shared by other nations, even in our dispersal. This is why the actions of Yaakov, one man, are taken as signs to guide all of his children, thousands of years later.

Like our forefather Yaakov, we have to fight in three ways: with diplomacy and offers of gifts, with preparation for war to defend ourselves, and with prayer and Torah study. As important as the first two of these are, only the third leverages our secret weapon, the key to our national defense.

Current events are a call to prayer and study. There is indeed something we can do right now, that can save lives.