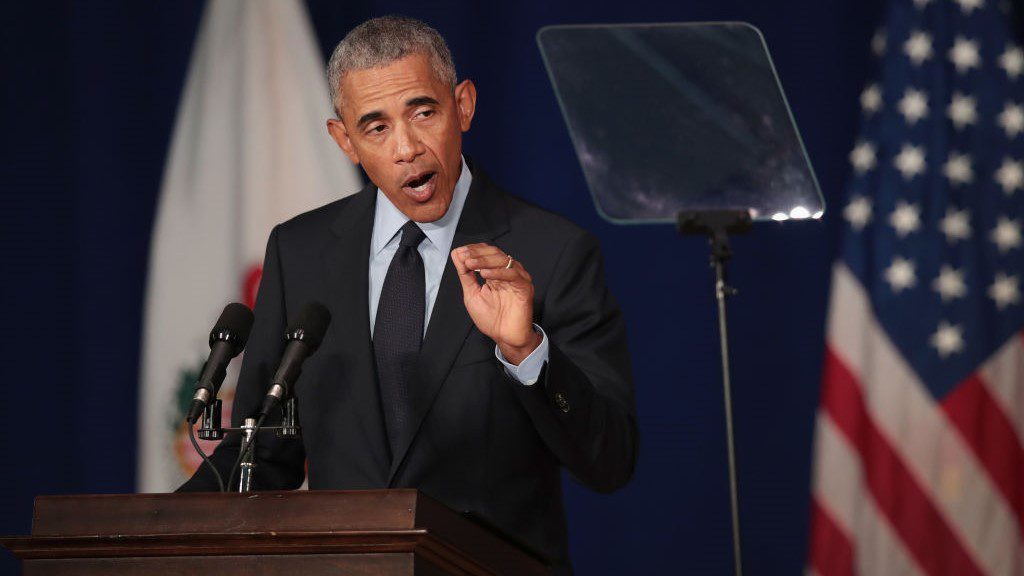 Few things could be more embarrassing than giving Barack Obama a prize for “ethics in government,” as the University of Illinois did on Friday. One is reminded of the Nobel Peace Prize given to Yasser Arafat for graciously accepting a base for his terrorist organization in the middle of Judea and Samaria.

The media has made a great deal of Donald Trump’s personal moral failings and fabrications. The funny thing is, his exaggerations and braggadocio don’t affect our lives. But when Barack Obama told us that “if you like your health care plan, you can keep it,” knowing full well that this was untrue, he defrauded every American. And when he and his staff knowingly misinformed the media about the nature of the Iran Deal, he made every American (and every Middle Easterner) less safe.

Obama told his audience in Champaign-Urbana: “Just a glance at recent headlines should tell you that this moment really is different. The stakes really are higher. The consequences of any of us sitting on the sidelines are more dire.”

Which headlines does he mean? Surely he is not discussing getting North Korea’s Kim Jong-Un to the negotiating table for the first time to discuss denuclearization. Obama could not be referring to the growing demonstrations and efforts to topple the Iranian dictatorship in the wake of President Trump’s withdrawal from the “deal” which propped up that barbaric regime. And one could only hope that he was not discussing Ambassador Nikki Haley taking the chair of the United Nations Security Council, as she confronts and rejects the same U.N. bigotry that the Obama Administration permitted to fester unabated.

Let us remember that in 2016, when President Trump said he could renegotiate trade deals and bring jobs back to America, Obama ridiculed this as impossible. His precise words were, “what magic wand do you have?”

And now that Donald Trump has waved that wand, sparking the economy, renegotiating trade deals, bring America to the point that—for the first time in history—the Department of Labor reported more jobs available than people looking for work. Obama wants you to believe it was all his doing.

“I’m glad it’s continued, but when you hear about this economic miracle that’s been going on,” he said Friday. “I have to kind of remind them, actually those job numbers are kind of the same as they were in 2015 and 2016.”

No, they weren’t. Unemployment declined from 5 percent to 4.7 percent in 2016, which Obama declared to be about as low as reality would permit. Today it is 3.9 percent, thanks to job creation he dismissed as a pipe dream.

And then, Obama called upon Americans to reject “the powerful and the privileged who want to keep us divided and keep us angry and keep us cynical.” Though it wasn’t what he meant, his words clearly call upon us to reject the legacy of Barack Obama.

As president, Obama needlessly and repeatedly injected racial hostility into race-blind incidents. Even the Washington Post called his remarks on the arrest of Professor Henry Gates “divisive,” and acknowledged that “Obama’s image as a racial healer never recovered.” Despite the fact that Gates refused to provide ID while standing near the damaged front door of his home, Obama declared that police “acted stupidly” and claimed the incident demonstrated that “race remains a factor in this society today.” In reality, the one who made race a factor was Barack Obama.

After Michael Brown robbed a corner store, refused to comply with police orders, and brought about his own death by attacking the responding officer, Obama called it “heartbreaking and tragic,” and lamented that Brown’s family “will never hold Michael in their arms again.” His words appeared to blame police for the death of a brutal assailant. And Obama’s words had violent and ongoing consequences, encouraging mob reaction not only locally in Ferguson, Missouri, but later in Baltimore, Dallas, and elsewhere.

And then there was Obama’s comment, “If I had a son, he’d look like Trayvon.” If I had a son who resembled the guy who gave an innocent neighborhood watch member a fractured nose, two black eyes and multiple lacerations to the back of the head, I wouldn’t call attention to that fact—much less speculate on the hypothetical similarity of a hypothetical child. Either way, I would not claim to promote racial healing while calling attention to the race of “victims” who in each case had initiated the confrontations in which they were involved.

What was Trump’s “crime?” To call out violence “on many sides,” pointing out that Antifa was no less violent or dangerous than neo-Nazis. While Nazis are reviled, Antifa is celebrated by the Left as it continues to suppress the free speech of all with whom it disagrees (today, they call it “no-platforming”)—with an uncanny resemblance to the behavior of the Nazi brownshirts of the 1930s.

No one elected Trump imagining him to be a paragon of morality. But those who supported the vastly more consequential lies and frank divisiveness of the Obama era are in no position to lecture. To condemn Trump on the one hand, while awarding Obama for his “ethics” on the other, means that someone’s moral compass is in sore need of calibration.