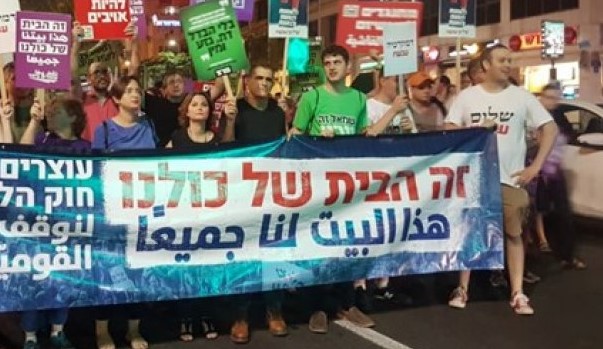 We hear it repeatedly: Israel’s “right wing” government is unfair to “Palestinians,” and now the new Nation-State law, which declares Israel the home for Jewish self-determination and Hebrew its official language, cements into place “racist” policies towards its minorities.

Begin at the beginning: “Palestine,” rather than describing an “indigenous” population, is a name associated with colonialism, supremacism, slavery and bigotry — especially against Jews. “Syria-Palaestina” was the name used by Greeks and Romans to establish hegemony over the Holy Land and its surroundings, including, of course, Israel, the homeland of the Jews. And when the Romans ethnically cleansed most of the Jews from Israel, they continued to use the name Palestine. The name “stuck” through centuries of aggression and hostility by one murderous empire against another, all trying to claim Jerusalem as their own. That the Al-Aqsa mosque is built upon the site of the Holy Temple is no coincidence — a church once stood there as well. All wanted to dominate the Jews and their homeland, towards whom they displayed a uniquely virulent hatred.

Yet today the Palestinian Authority attempts to deny that the site of the Holy Temple, or the Holy Land itself, has anything to do with Jews. This is because that simple historical fact utterly contradicts their narrative.

Not long ago, PA President Mahmoud Abbas visited Saudi Arabia, and wanted to present a sign of Palestine’s unique national culture. So he presented a framed copy of the cover of the Palestine Post… today’s Jerusalem Post, which then as now was a Zionist publication.

This is because until 1964, when Yassir Arafat created the PLO, “Palestinian” was used as a reference to Jews. The 1938 flag of Palestine was a gold Magen David superimposed upon equal-sized blue and white panels. Palestine was also the place Arabs began to boycott in 1945.

To create “Palestine,” Arabs revived a word used by Roman barbarians, a flag from the Arab Revolt (especially the short-lived Arab Federation of Iraq and Jordan, which in 1958 used precisely the same variant as today’s PA), and a map from Israel — for, in contra-distinction to any true indigenous people, the map of Palestine “coincidentally” traces the precise borders of the 22% of British Mandatory Palestine not given to the Hashemite clan of Mecca.

We should not forget that the vast majority of British Palestine is today’s Jordan, which is three times as large as Israel. No one talks about Jordan’s “legitimacy” under its Saudi king. The morphing of maps of “Palestine” into maps of Israel has no connection to a distinct people. The purpose of this Palestine is to displace the Jews once again, while claiming that Jews are somehow not indigenous, and the descendants of marauders from Arabia, the homeland of all Arabs, from which they expanded during a period of Jihad following the death of Mohammed, are the “indigenous.”

The dishonesty is obvious. Arabs did not build the pyramids in Egypt or the ziggurats of modern-day Iraq. They enslaved and ethnically cleansed the indigenous (black) Africans from the lush Mediterranean coastline of Africa, and just in recent decades pushed Christians out of Lebanon. Note that an Arab cannot even pronounce the word Palestine in Arabic, because the language has no phoneme for P. “Palestinian” Arabs are the world’s only population to claim to be native to a land whose name they cannot pronounce.

There are refugees from every conflict. And what humanitarians do is help those refugees find new homes, where they can live in safety and comfort. We do not seek to repatriate them — which is why there is a big discussion now about Syrian refugees.

Today, there are people in America who call themselves “Palestinian-Americans” — but curiously far fewer Syrian- and Egyptian- and Iraqi-Americans. Many of these Palestinian-Americans have never lived in Palestine or Israel, and have family trees filled with relatives who lived, at various points in time, in every part of the Arab world — which constitutes 22 countries, 423 million people, over five million square miles of land. And if they search back to a common foundation, it will be, of course, in Arabia, just as every Jewish family tree eventually goes back to Judea.

Yet they claim “Palestine,” uniquely, as their “homeland,” describing themselves as a Palestinian-American — and they don’t mean the Jordanian part. They mean Judea. They have been indoctrinated in this false narrative — for across America, fraternal organizations of Moroccan, Libyan, Egyptian, Algerian, Iraqi, Syrian, and, yes, Saudi Arabians service Arab-Americans. They, too, are Arab-Americans.

Homeland denial is a close relative of Holocaust denial, which runs equally rampant among supporters of “Palestine.” Homeland denial pretends (a) that the Jews have not maintained an historical presence in their homeland for 3,500 years, save for brief periods of hatred, genocide and ethnic cleansing so severe that we simply don’t know if more than a handful of Jews survived; (b) that the Jews have somehow given up on praying towards Jerusalem and for their return to Jerusalem, which show that no people or faith has as dear a connection to their homeland as do the Jews; and/or (c) that the current Jews are all not merely Ashkenazi, but actually Khazars who converted — never mind the Yemenite, Iraqi, Moroccan, Syrian and Ethiopian Jews who recognize those supposed “Khazars” as their brothers and sisters. No one is hated for being Khazar — but as it has been throughout history, bigots continue to find new excuses to hate Jews.

Once we discard this distorted and frankly racist narrative, we recognize that accusing Israel of apartheid and other harmful “policies” is itself part of that same unique hatred. Before and after the creation of the modern country of Israel, the Arab world erupted into pogroms and hostility against their local Jewish populations. Over 99% of the Jewish populations of Arab countries have been ethnically cleansed over the last century — there isn’t a single Arab country with even 10% of the Jewish population it had 100 years ago. The land stolen from Jews during that ethnic cleansing is over five times the size of the State of Israel. And no one seems to accuse the Arab states of apartheid. After all, it’s only Jews they hate.

A simple, appropriate tit-for-tat response would have been to quite literally expel all Arabs from Israel, which we regard as unthinkable, extremist, and evil. But that would merely have applied the standards used by every Arab state against its Jews. By that calculus, Arabs in Israel would be not merely subjugated, but subjected to the very pogroms and needless killing of which Israel is routinely — and falsely — accused.

In other words, even if the mythology about Israel’s “policies” were actually true, that still would not mean that Israel was guilty of apartheid, but rather was responding in kind to the bigotry of the surrounding Arab nations — in most of which, to this day, a Jew cannot worship freely, seek employment, or in many cases even travel safely, including both the Gaza Strip and the West Bank cities under the control of the Palestinian Authority. The Palestinian Authority not only refuses to guarantee the safety of a Jew who enters its territory, whether Israeli or otherwise, but it also pays the families of terrorists and declares explicitly that no Jew (Israeli Jew, one who wishes to live in the Jewish homeland) will be allowed to live there. Yet no one seems to accuse the Palestinian Authority of apartheid.

What did Israel do instead? What are Israel’s “policies?” Try this question: how many Arabs in Arab states are able to vote in free, fair, open elections? Is it Israel’s fault that Mahmoud Abbas is in the 13th year of his 4-year-term as “president”? The third largest political party in Israel’s Parliament is the United Arab List. There are also Arabs on Israel’s Supreme Court — making the only country in the world with both Jewish and Arab Supreme Court Justices the one accused of “apartheid.” Arabs in Israel can explore, study and perform in any profession, women can drive, get an education and work without fear of an “honor killing” if they fall in love with the wrong person, and homosexuals can live without fear of being jailed or burned alive — all rights denied to them in many Arab states, and also in the West Bank and Gaza. By the definition of apartheid established in South Africa, the only legitimate description for characterizing Israel as an apartheid state is “false.”

Arab citizens of Israel have the same rights as anyone else. There is no country in the world with Israel’s ethnic diversity yet less racism. The valedictorian at Tel Aviv University a few years ago was an Egyptian Arab, who was courageous enough to attend college in Israel despite what he was told, yet shocked by the level of difference between the lies that he was told about what to expect, and the reality.

The life expectancy of an Arab in the West Bank is several years longer than in Jordan. Ditto the life expectancy of a Gazan over an Egyptian. Yes, despite everything you’ve been told about ethnic cleansing and genocide, the Arab population of Israel is five times as large as it was in 1967. The Arab population of the West Bank and Gaza is also five times as large. The number of universities in Gaza went from one to 18 between 1967 and 2005.

The three results of Israel’s “policies” towards Arabs are superior healthcare, higher education, and the right to vote. Certainly by all definitions of genocide and ethnic cleansing, describing Israel as doing so is, once again, false.

You want racism in Israel? No one but Muslims are permitted to pray on the Temple Mount, precisely as it is in Mecca. This is characteristic of the treatment of Coptic Christians in Egypt and Yazidis in Syria — and explains why Bethlehem, once 20% Christian, is merely 5% Christian today.

Israel’s policies and Nation-State Law are not the problem, any more than the dozens of countries where Islam is the official religion. The problem remains the unwillingness of Arabs to accept that Palestinian Arabs remain Arabs, part of the Arab nation, and that Judea remains the homeland of the Jews.

Published in the Times of Israel.