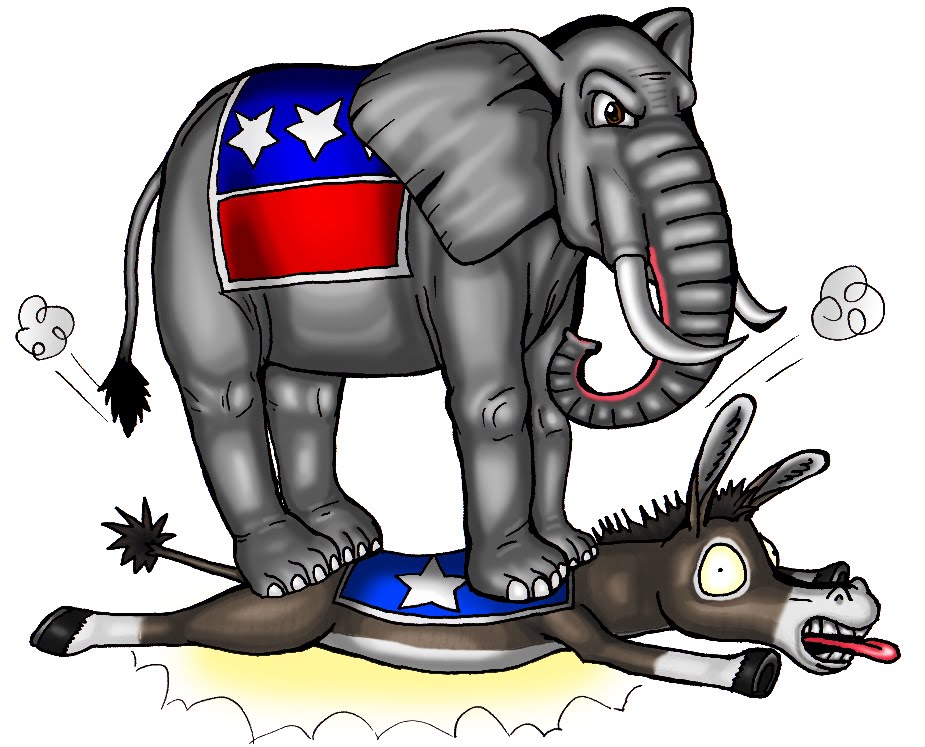 I have to admit that Rabbi Shafran creates better titles. “One Man’s Ceiling is Another Man’s Floor” is no match for “Kashering Elephants and Donkeys.”

But when it comes to the content, I have a few quibbles that I thought worth putting into writing, much as our different perspectives are already reasonably clear. In fact, I would argue that Rabbi Shafran accentuated our differences, as there is now little room for debate about what we must agree is true.

For example, he claimed that I argued that “only ‘one political party’ can rightly be supported by Torah-conscious Jews.” That would have been a controversial statement, especially given the many empirical counterexamples of observant Democrats, plus the philosophical preferences that explain their choices. There is no one Torah position on gun ownership or tax reform. You can support government welfare programs that end up encouraging single motherhood, yet be observant. You can favor unfettered immigration, even from countries where hatred for the West, for individual liberty, and for Jews are all part of the school curriculum, and still be an observant Jew. On balance, one can pull the Democratic lever on the way to Mincha.

But that wasn’t the argument. All I said was that those who support Torah values “will be deemed partisan,” advocating views considered to be Republican rather than Democratic Party positions, no matter the individual’s outlook on all of the above issues. This is both true and obvious.

Less than twenty years ago, US Senate Candidate Hillary Clinton firmly declared that “Marriage has historic, religious and moral content that goes back to the beginning of time, and I think a marriage is as a marriage has always been, between a man and a woman.” Does anyone wonder why her position ‘evolved‘? Had she not changed her mind, Bernie would likely have taken the nomination, and it wouldn’t have been close. We, as religious Jews, have positions on moral issues that do not ‘evolve’ and which, as a result, are no longer compatible with the mainstream views of Democrats on those same issues. This is an objective reality with which we must grapple.

Rabbi Shafran minimizes the relevance of this particular example, saying that the redefinition of marriage is “no longer an issue, as it is, for better or worse (worse), not only the Supreme Court-established law of the land but embraced by many Republicans, simple citizens and legislators alike.”

It is the “no longer an issue” point that is incorrect. Yes, it is the law of the land, thanks to a Supreme Court that transgressed its constitutional authority to fabricate a “right” unknown to the founding fathers of the country. But as a result, there are currently multiple cases winding their way through the courts concerning Christian business owners hit with bankruptcy-inducing fines and penalties for their personal religious decisions to not affirmatively support these “redefined” marriages. Yes, they were penalized for shav v’al ta’aseh!

There is an active movement to stifle dissent and require public approval of the Obama Administration position, to the point of terming us bigots for maintaining what the Torah says about marriage, much less what the Gemara implies about a society that would provide official recognition for “redefined” unions. Democrats are not those who will fight for legislative protection of our religious rights in this area.

Rabbi Shafran also challenged my comment that Democrats are turning against Israel; he wrote that “both sides of the aisles in both houses of Congress are staunch and proven defenders of Israel’s security needs.”

My friend Paul Miller, Director of the Haym Salomon Center, provided the best reply. Two days after Rabbi Shafran’s piece was published by Hamodia, and two days before it appeared on Cross-Currents, Paul posted to Facebook a quote which he attributed to a “Washington lobbyist who asked for anonymity:” “If you are a liberal Jew and don’t care about Israel, the Democratic party is your home. If you are a liberal Jew and Israel is important to you, you have a lot to think about.”

Armin Rosen wrote in Tablet Magazine that the “bipartisan consensus is fraying, at least as far as the parties’ official positions go.” On a host of issues, the Republican platform is far more consonant with the pro-Israel position (also known as reality). Contrary to Rabbi Shafran’s claim that an amendment to the Democratic platform calling for an “end to occupation and illegal settlements” was “effectively quashed by the Democratic mainstream,” the vote to defeat it was a less-than-overwhelming 95-73 (57% to 43%), and “CNN reported that the move garnered the loudest negative response of the day from the audience.” Needless to say, the Democrats were nowhere near “reject[ing] the false notion that Israel is an occupier” — that is a quote from the Republican platform.

Rabbi Shafran is surely correct that “there are times when ‘conservative’ values serve Klal Yisrael best, and times when ‘liberal’ ones do.” But we should also acknowledge that beliefs mandated by the Torah are frequently described as “conservative” by American politicos. I cannot think of a case where unquestioned Torah views mirror Democratic, liberal positions, as a counterpoint to our “conservative” views on marriage, gender and “anti-Israel” anti-Semitism which I mentioned earlier. [No, abortion is no exception: prior to Roe v. Wade, laws permitted abortions in cases mandated by Torah, and most “pro-life” politicians would draw lines similar to our own. In that case, as well, our view more closely parallels that ascribed to “conservatives” in America.]

Finally, with regards to Charlottesville, it’s not about what the advertising said. Because there seems to be some confusion, let’s examine the President’s words:

Two paragraphs earlier he referred to these people, the non-supremacists, as very fine people:

It’s there in black and white: although neo-Nazis should be “condemned totally,” there were also “very fine people on both sides.” It is the claim that the President “seemed to pointedly equate the supremacists and the anti-hate group” that is both wrong and needlessly partisan — even if it is voiced by other Republicans. On those occasions when he did not mention neo-Nazis by name, the President nonetheless called out those who were hateful, bigoted and violent on both sides, vs. those “very fine people on both sides.”

Antifa clearly organized their armed presence in Charlottesville, so Rabbi Shafran’s claim that the only counter-protest was that “organized by a coalition of peaceful rights groups” is simply mystifying. In the succeeding weeks, Antifa, as I mentioned, proved its penchant for violence. In Berkeley, they attacked a “No to Marxism in America” rally with sticks and pepper spray, while using shields decorated with “No Hate” [sic]. The Washington Post described “five black-clad antifa members, each windmilling kicks and punches into a man desperately trying to protect himself.” Do they sound like “very fine people?” Would it be appropriate to condemn neo-Nazis while allowing these violent goons to go unmentioned?

Agreed. “We American Jews who are faithful to Torah must advocate our interests and our ideals, but judiciously.” And we cannot pretend that if we truly do so, we will escape being cast as “partisan.” This is not because we are “partisan cheerleaders,” but because one of the two major parties of our day has departed from our basic values in a host of areas.