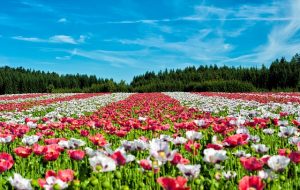 This week we read that Yitzchak (Isaac) wanted to bless his older son Esav, but Yaakov came instead, as advised by his mother Rivka. As a result, both sons were blessed — and though Yitzchak was deceived, he was Divinely Inspired to give each child the right blessing.

In his blessing to Yaakov, Yitzchak says “And G-d should give you from the dew of Heaven and from the fat of the land, much grain and wine” [27:28]. But he blesses Esav by saying “from the fat places of the earth shall be your dwelling” [27:39]. Why does Yitzchok say that G-d should give Yaakov “from” the fat of the land, yet ask that Esav be blessed to always live in fertile places?

Rabbi Shlomo Yitzchaki (Rashi) explains the difference — and that the blessing of Esav is indeed greater, in a way. The word “Elokim” [G-d] refers to the Divine attribute of justice. With regards to Esav, Yitzchak asks that G-d give him blessing whether or not he is truly deserving, but asks that Yaakov receive when it is correct and just.

Yaakov is required to demonstrate a higher level of trust in G-d. Often, Divine Justice is hidden from us. We don’t see the reasons why each person is receiving what is appropriate. But Yitzchak expects Yaakov to accept the Divine Will, and not complain that G-d is being “unjust,” as it were, even if it appears unfair to human eyes. He does not have the same expectation of Esav, and thus asks that Esav have abundance at all times.

Rashi points out that King Solomon learned from this, and pronounced similar blessings when the Temple in Jerusalem was completed. With regards to Israel, he said “give to every man according to his ways, whose heart You know” [I Kings 8:39] — give according to that person’s heart, according to what You know to be true deep inside. But then Shlomo HaMelech says “concerning a stranger that… comes out of a far country for Your Name’s sake” that G-d should “do according to everything that the stranger calls upon You [to do]” [8:41, 43].

Shlomo explains why he asks that G-d fulfill everything the non-Jew asks for during his prayers: “that all the people of the earth may know Your name, to fear You, like your people Israel [do], and to know that Your name is called upon this house which I have built” [8:43].

The People of Israel interacted with G-d directly, so Shlomo HaMelech takes for granted that they will fear G-d, even if G-d gives according to that person’s heart rather than his or her words. But Shlomo knows that if an idolator makes an offering to G-d and his request goes unanswered, and then he makes an offering to an idol and what he asks for actually happens, then the idolator might reach the conclusion that the idol actually has power, power that G-d does not!

The Jewish nation is expected to trust G-d and follow Him at a “higher standard.” Both Yitzchak and Shlomo ask G-d to favor the requests of all the people of the earth — even more than He favors the prayers of His own nation (!) — in order that every person on earth comes to recognize his or her Creator.