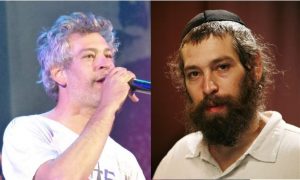 We all know what happened. Matisyahu was invited to the Rototom Sunsplash Reggae Festival. BDS Valencia pulled out the stops to ban the Jew. Rototom demanded that Matisyahu pass an ideological litmus test and endorse yet another Palestinian state. He refused. They banned him.

At that point, everyone realized BDS had played its hand — it was about Jews, not “Palestinian rights” or any such nonsense. It was anti-Semitic hatred in new clothing. The Spanish government and leading journals condemned the Rototom organizers, not just Jewish groups in America. And Rototom backed down, putting Matisyahu back on the schedule for Saturday night.

Here’s the thing. Matisyahu cut his beard in late 2011 and dropped his yarmulke not long after. “No more Hasidic Reggae superstar,” he told fans on Twitter. And everyone has known this — for more than three years.

If you don’t identify as a Jew, Matisyahu, they’ll remind you. It may seem sad, it may seem unfair, but it’s how it works. HKB”H told us so. There are many, many more Mitzvos to do, and being the only well-known Chassidic reggae artist had its benefits. So… it’s not too late to try the Torah path once again.

One Reply to “A Footnote on the Matisyahu Debacle”