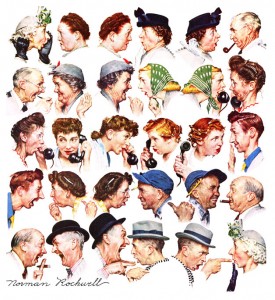 What separates human consciousness from that of animals is the ability to think in terms of ideas, and act based upon a conscious decision rather than instinct. How do we communicate these ideas to others, and build upon them? This comes to us through the power of speech. A parrot can mimic sounds; a human being can communicate and understand ideas and concepts.

This unique human capacity provides us with incredible opportunities to build. Speech enables us to learn and to teach, to work together to improve the world, and to communicate with our Creator.

But as we are warned in this week’s reading, the power of speech also carries with it a unique potential for evil. Rabbi Yisrael Mayer Kagan, the Chofetz Chaim (known by the name of his most famous work on the ethics of speech), explains that “Lashon Hora,” evil speech, comes in many different ways: verbal intimidation, hurtful remarks, gossip about others, and more.

He tells the story of a small town, hundreds of years ago, where a rumor circulated regarding one of the men in the congregation, accusing him of criminal activity. They sent a question to a leading Rabbi of that era; they said that for the time being they had not granted him customary honors in the synagogue, but were deciding what else they should do.

The Rabbi’s response was immediate and strong: that the leaders of that congregation must publicly beg forgiveness of the man. Why? Because they had publicly shamed him without definitive knowledge of his wrongdoing. Had there been witnesses proving his criminality, of course, a punishment would have been warranted — but to publicly embarrass him based on evil gossip was, said the Rabbi, literally worse than most anything the man could have done.

The misuse of the holy gift of speech surrounds us today. Leading entertainers comment that social media has created an incredibly hostile environment, where everyone is a critic, ready to condemn everything from the tenor of their voice to the size of their nose. We’ve added an entirely new word to the vocabulary: cyberbully. In some locales, they have rightfully decided that this term refers to a crime, one that has all too frequently led to tragic deaths.

Today we do not get Divine signals that we are doing wrong, which, our Sages tell us, was the cause of the spiritual blemish of tzara’as described in our reading. Who can claim that were that malady to exist today, he or she would not be blemished?

Fortunately, we have the guidance of people like Rabbi Kagan if we wish to improve, and stop misusing this great spiritual gift that we have been given. Let us, this week, resolved to do something more to improve in this critical area, and make the world a better place.