Last night was the yahrtzeit, the anniversary of his passing, of Rav Zvi Elimelech Hertzberg zt”l, my wife’s grandfather. The Hertzbergs were amazing people — they took Holocaust refugees into their homes, treated them like children, and helped them go on to lead productive lives here in America. Someone pointed out to me not long ago that as a result of their efforts, there are hundreds of sincere, active Jews in Baltimore and beyond who otherwise would have been lost. 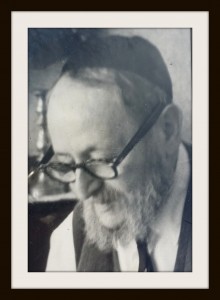 As the Rav of his shul, Rabbi Dovid Katz shlit”a, pointed out last night, Rav Hertzberg would also speak truth to power. He was fired from rabbinic posts for being too honest — until a group of devoted followers created a synagogue, named for his father Avraham zt”l, and set him up as their Rabbi.

At a time when it was extremely unpopular to do so, Rav Hertzberg drew lessons like this one, from this week’s Torah reading. It refers to Nadav and Avihu, the sons of Aharon the High Priest, who went outside what G-d had commanded — and were killed as a result. Reading the passage, one could think that it was a cruel or capricious reaction to two people who were simply trying to do their own offering to G-d. But as Rav Hertzberg explains, the nature of their error, and HaShem’s response, offer an eternal lesson:

“And they brought a strange fire before God, which he had not commanded them” [Lev 10:1]

Our Sages explain (Sanhedrin 52) that their souls were burned, while their bodies remained intact. And from here we take [a lesson] to all the Jewish generations, that when one introduces a “strange fire” into Judaism, even with the best of intentions, if it is not in accordance with what G-d has commanded us, the result is that the soul is burned even if the body remains intact. For the Jewish soul depends upon observance of the Commandments of the Torah, its fences and supports, without adding or subtracting. If they come (Heaven forbid) to change even the tiniest thing [lit. “the end of a Yud,” the tip of the smallest letter], even if it appears that the body is intact, it is a body without a soul. The Jewish soul is only preserved by following the path of our fathers, and the heritage of our fathers, without change, repair, or addition.

When he said this, it wasn’t merely unpopular, it seemed entirely divorced from reality. At the time everyone thought that traditional observance was dying on the vine, that Jewish growth was about keeping up with the times.

Today his words could be called prophetic. Today we see that all the new ideas led to generations that abandoned Judaism entirely. Put it this way — the synagogues that fired Rav Hertzberg for his lack of political correctness have all closed, while his shul, which functioned without a Rav for over two decades (so tight was the “family” he created), is still thriving today.

May the Neshama of HaRav Tzvi Elimelech ben Avraham zt”l have an elevation, and may his memory be a merit for us all.