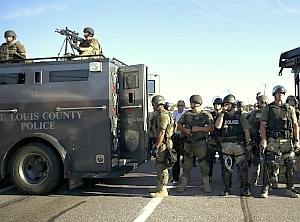 Over the past few weeks, those reading the news in the United States have been confronted with two entirely different accounts of events in Ferguson, Missouri. In the first version, an unarmed man with his hands up was shot by police. In the second, a large, domineering man physically struck a smaller police officer until the officer, in fear for his life, shot his attacker.

Two such narratives can only take hold in an environment in which authority is not trusted. And indeed, in some countries the legal authorities have little to do with any actual justice. The Torah tells us, in this week’s reading, both that laws must be enforced rather than simply existing in a book, and that the leaders of a city must be dedicated to the welfare of each individual.

Our reading begins: “Judges and officers you shall put in all your gates” [Deut. 16:18], referring to each city. Rabbi Shlomo Yitzchaki says that the officers are not mere bureaucrats, but must use “rods and straps” as necessary to force people to accept the judgment of the judges. This, of course, could be a recipe for tyranny.

The counterbalance is found at the end of our reading this week. There we learn that the elders of the city are obligated to look out for the welfare of every individual, even a visitor. When a person is found dead outside a city, its elders must come to the site and declare “our hands did not spill this blood, and our eyes did not see [him]” [21:7]. Rashi asks, “could we imagine that the elders of the court are murderers? Rather, [this means that] ‘we did not see him and let him leave without food and without escort.'”

Ferguson is the result of a breakdown in trust between the authorities and the people whom they are supposed to serve, a breakdown which is sadly replicated across the country. A veteran police officer (and Professor of Homeland Security) from Los Angeles touched off a firestorm of criticism when he dared to say that the middle of a violent riot is not the ideal time to confront a police officer, and that approaching an officer aggressively is a bad idea. Despite acknowledging that officers can engage in bullying and even criminal behavior — and saying that these should be challenged via appropriate channels — he was widely characterized as an advocate for dictatorship, a police state.

What his critics do not realize is that denying officers any authority “on site” is advocating for anarchy. Officers in Ferguson did not show up in armored vehicles because they wanted to play with their overgrown toys, but because stores were being looted, cars were being burned, and they were facing bottles, Molotov cocktails and even bullets. The public order is not preserved by letting every miscreant have his way.

There must be a balance. The leaders of a city must be interested in the public good, and every individual must respect the law, or expect to face “rods and straps” until he does. That is the lesson of our reading, and as current events demonstrate, it is every bit as apt today as it was when the Torah was given. Human nature has not changed.

We are fortunate today to live, for the most part, in countries where the leaders of each city and nation are elected, and can be voted out if they do not serve the public interest. In such a system, appropriate legal methods exist to challenge and correct abuses when they happen. It is the obligation of every individual to observe the law, use the law to challenge its abuses, and try to change it where necessary — not to “take matters into our own hands” or encourage the anarchists among us.