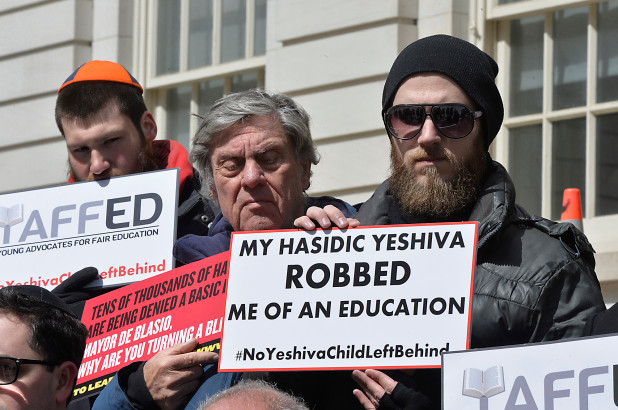 There is an ongoing machlokes l’shem shamayim, an “argument for the sake of heaven” within the Jewish world, concerning the correct blend of religious and secular education. Some Jewish schools aggressively compete with the finest prep schools in the country. Others aim to satisfy more basic levels of secular instruction while focusing more intensively on Jewish studies. Yet a third group minimizes the study of secular subjects, producing graduates barely fluent in English, much less geography or biology.

It is appropriate for this topic to be actively debated and discussed, for Rabbinic leaders to encourage schools to follow their educational paradigms, and for parents to choose schools for their children which best meet their own priorities and beliefs. But no matter where we fall in our own philosophies of Jewish education, it is irresponsible and dangerous to direct the heavy hand of government against the choices of others.

That is the approach taken by the “Yaffed” organization, which claims to promote discussion by “rais[ing] awareness” in the community, but in reality aims to end it via coercive action. Yaffed sued New York State in Federal court, demanding that the state Education Department force Jewish schools to change their curricula — and this was a key motivator behind recent state draft requirements for private schools which, at least initially, appeared to relegate religious education to an afterthought.

Jewish survival has always hinged on Jewish education, and our history is replete with notorious examples of government interference — often with active assistance and even prodding from Jews. Whether those Jewish antagonists had a chip on their shoulder towards Judaism or were motivated by genuine concern for children, the results have always been disastrous. From the Greeks and Romans to Tsarist and Communist Russia, educated Jews — that is to say, Jewishly-educated Jews — know that government intervention in Jewish education has been a consistently destructive force.

It has become commonplace for the outside world to cast Jews with secular university educations as more highly educated than those without. Yet as alumni of both elite Ivy-League Universities and revered yeshivos, we know that the scholarship, energy and forward-looking motion within Judaism today arises primarily from those who sacrifice an advanced formal secular curriculum in favor of additional Torah study.

This is one reason why we chose schools for our children that heavily favor Torah subjects and long hours in the beis medrash at the expense of some secular studies. We fully respect the right of other Jews to make other choices. We demand the right to make our own.

This does not mean that the content of our schools’ curricula should not be debated. On the contrary, it is something which must constantly be monitored, discussed, and optimized — but within our community, never imposed upon us from the outside.

We are disturbed, therefore, to encounter an attitude of indifference or acceptance even among some Orthodox Jews, who disagree with those who consciously choose a more cloistered existence — and who believe that these government regulations will lead to no harm. The machlokes about the balance of limudei kodesh and limudei chol may be l’shem shamayim, but there is nothing l’shem shamayim about government interference in a community’s yiddishkeit. It’s also remarkably short-sighted to imagine that if we permit increased government intrusion, it will stop at a few more hours of limudei chol in chassidische chadorim.

The obvious dangers of the Yaffed approach should be self-evident to anyone paying attention to the state of education outside our community. Schools, textbooks and mandatory curricula have become petri dishes for social engineering — culturing growth in directions diametrically opposed to a Torah worldview.

Jewish schools in Great Britain are threatened with closure if they fail to teach “tolerance and respect” for “alternative lifestyle choices,” or if they offer a religious viewpoint on Creation “as having a similar or superior evidence base to scientific theories.” In the United States, schools teach “Palestinian” history while referring to “Holocaust Fatigue” to dismiss the need for education regarding the Nazi genocide. And a Canadian teacher was dismissed for mentioning to a group of high school seniors, during a discussion of differences between personal opinions and the law, his personal belief that abortion is wrong.

The only ordained rabbi on Yaffed’s Advisory Council is Eric Yoffie, President Emeritus of the Union for Reform Judaism. That the Reform movement pursues an aggressive statist, anti-religious-freedom, progressive agenda is just as relevant to Mr. Yoffie’s involvement as his history of aggressive hostility towards traditional Judaism and its rabbis, both in America and Israel.

In Great Britain, the government claims that “even though children may have to go to a different school, and this might not be the school of the families’ choice, the enforcement action would ultimately be to the benefit of children.” In other words, state authorities explicitly posit that they are better qualified to determine what is “to the benefit of children” than the children’s parents.

That, of course, is the tacit mindset behind the recent decrees of the New York State Education Department. That is why although the current regulations may not create an immediate problem for our schools and our children, unless we join forces to push back, the next step certainly shall. For governments to tell our schools how to teach our children should offend not only a subset of the Orthodox community, but anyone who values civil liberties, religious freedoms, and parental rights.

Rabbi Yaakov Menken is the Managing Director of the Coalition for Jewish Values (CJV). Jeff Ballabon is chairman of B2 Strategic and advises CJV on strategy and policy.