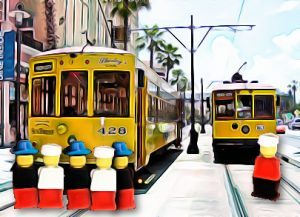 There is an old joke of a mugger demanding of a Jew, “your money or your life!”

The Jew doesn’t move, and the mugger demands, “hurry up already!”

Despite its play on antisemitic tropes, even Jews find it funny. Yet we know from the Bible that something very much like this actually happened. In the story of the Tower of Babel, we learn that the people of the world did not merely rebel against G-d. They rebelled against humanity as well.

The Medrash teaches that if a person was carrying a brick up the tower and dropped it, people would cry. Dropping the brick slowed down the construction of the tower, their supreme goal.

But if a person fell off the ladder to his death on the way down, people would not cry. This, as much as the rebellious nature of the tower itself, represented the corruption of human values. They placed inanimate objects ahead of human lives.

Often, the questions are not so clear-cut. In modern ethics, there is something called the Trolley Problem, a question asked 50 years ago. Imagine a trolley running out of control down a hill, and there are five people tied to the tracks further down. You are standing next to a lever. Should you pull the lever, it will save those five people, yet the trolley will roll down a side track and kill someone else. Are you supposed to pull the lever?

As it turns out, this is not merely a theoretical question. In 1929, Arabs rioted in Hebron, bent upon massacre. Yet they gave the Chief Rabbi of the city a choice: if he turned over the Ashkenazi Jews (of European origin), they would spare the Sephardim (from the Arab world).

The Rabbi refused. The Torah teaches that we are in no position to judge whether five people are of greater worth than the one. We can sacrifice ourselves to save others, but not pass judgment on other people. We cannot pull the lever.

Why is this so? Because in our Torah, human life is of infinite value. Every person has within them a spark of Divinity, which is infinite. Five times infinity is infinity. Infinity divided by 20 is infinity. We cannot place one infinity ahead of another.