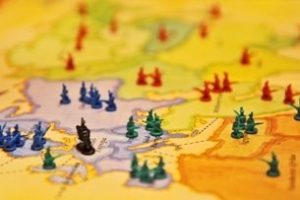 This week’s Haftorah discusses Ammon coming to wage war with Israel. There was a man named Yiftach, who was the son of a concubine, rejected by his half-brothers. He had moved away, but was a natural leader — many gathered around him, though they were not exceptionally knowledgeable. The verse even calls his followers “empty people.”

Nonetheless, with Ammon coming to fight them, Israel needed a leader, and they turned to Yiftach to lead and defend them. He sent Ammon messengers, asking why they were about to fight. What was the problem?

The message came back: “You stole our land!”

The land in question was an area which, many hundreds of years earlier, had been the subject of a war between the Ammonites and the Emorites. The Emorites won that war, and had lived in that land for centuries.

Then, as Yiftach explained to the King of Ammon, the Nation of Israel came up from Egypt and crossed the desert, hoping to enter their Holy Land. They asked permission of both Edom and Mo’av to pass through, and both nations refused them permission. So they went further north, avoiding the land of Mo’av, and sent messengers to Sichon, leader of the Emori, king of Cheshbon.

Sichon was not content to simply refuse permission: he gathered his army to war with Israel. Given no choice, Israel fought back and defeated Sichon… at which point the land became theirs. This land was on the east side of the Jordan River, where the tribes of Gad, Reuven, and half of Menashe stayed and lived. It was part of their inheritance.

The King of Ammon demanded land which they had lost fighting a war with the Emori, which had belonged to the Jews for hundreds of years, and was part of their Divine Inheritance. So Yiftach said to Ammon, you keep what your idol Kemosh gave to you, and we’ll keep what the L-rd gave us, and we will have peace between us.

The king of Ammon refused, waged war against Israel, and lost.

It is interesting that the King of Ammon is never named. Apparently, his name is not relevant. The idea that the Jews are stealing something from the non-Jews is a classic anti-Semitic trope, which recurs in different times throughout history under different names. Of course, I suppose we’d be hard-pressed to find another example of people claiming that the Jews are stealing Judean land from migrants from another land… oh, wait…