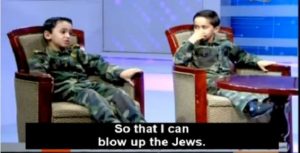 Today as always, our enemies are unafraid to speak lies with complete conviction. Just as their predecessors claimed as fact that Jews are disloyal, controlling and murderous, so too today. But in our day, we are afraid to speak the truth with similar conviction.

The first of these is largely uncontroversial, if too apologetic in itself. To describe Israel as “murderous,” “inhumane” or “vicious” demonstrates a serious disconnect from reality — yet it is true that the term “bloodthirsty” is uniquely reminiscent of ancient anti-Jewish slurs.

The other, however, comes across as a desperate attempt to accuse Jews of equal racism — and must invert fact with fiction in order to do so.

For example, it instructs us: “don’t claim Palestinian children are ‘taught to hate’ or somehow less innocent than other children.” Are we to pretend, then, that children’s TV programs are not lauding the killing of Jews (not Israelis or Zionists, but Jews), that children are not interviewed expressing their desire to be murderers and “martyrs,” or that they are not paraded in the streets wearing mock suicide belts? Are we to honestly believe that 13 and 14-year-olds shot while stabbing Jewish youths and grandmothers were innocent victims of Israeli aggression?

It even tells us that “we made the desert bloom” is a racist trope, used to excuse taking land that rightfully belongs to others. Apparently, Robert F. Kennedy was a Zionist hasbara specialist, as he wrote for the Boston Post just a month before Israel declared independence, “The Arabs are most concerned about the great increase in the Jews in Palestine… The Jews point with pride to the fact that over 500,000 Arabs, in the 12 years between 1932-1944, came into Palestine to take advantage of living conditions existing in no other Arab state.”

And finally it requires, “don’t claim there is ‘no such thing’ as Palestine or Palestinians.” According to the writer, Minister Fathi Hammad of Hamas must secretly be an anti-Palestinian racist, as he declared in 2012:

Al-Aqsa and the land of Palestine represent the spearhead for Islam and for the Muslims… When we seek their help it is in order to continue to wage Jihad. We all have Arab roots, and every Palestinian, in Gaza and throughout Palestine, can prove his Arab roots — whether from Saudi Arabia, from Yemen, or anywhere. We have blood ties… Brothers, half of the Palestinians are Egyptians and the other half are Saudis. Who are the Palestinians? We have many families called Al-Masri (Egyptian)… they may be from Alexandria, from Cairo, from Dumietta… We are Arabs! We are Muslims! We are a part of you!

Zuheir Muhsein, leader of the pro-Syria faction of the PLO from 1971-1979, was yet more adamantly a racist, declaring that “Palestinian Arabs” were a fabrication, a “country” that would only exist until Israel was destroyed. He informed the Dutch Trouw newspaper in 1977:

Between Jordanians, Palestinians, Syrians and Lebanese, there are no differences. We are all part of one people, the Arab nation… Only for political reasons do we speak about our ‘Palestinian’ identity, since it is of Arab national interest to posit the existence of a ‘Palestinian people’ to oppose Zionism… Yes, the existence of a separate Palestinian identity is only for tactical reasons… the moment we reclaim our right to all of Palestine, we will not postpone for one second the unification of Palestine and Jordan.

No. Equating lies with truth may pass for sophistication in the PC-coated halls of academia, but does nothing for justice or morality.

This is not about Israel, Zionism, or a political dispute. When confronted by strident anti-Semitism in new clothing, we must be brutal in only one respect, so very unlike our enemies: we must be brutally honest.