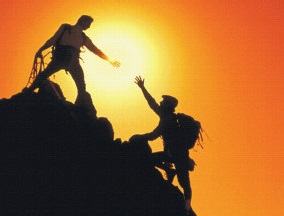 This week, Rabbi Mordechai Dixler, our program director, shared with me a collection of Torah thoughts and concepts from Rav Avraham Elimelech Biderman of Bnei Brak, Israel. In a few short paragraphs Rav Biderman tied together our reading (Pikudei, the last portion in Sh’mos, the Book of Exodus), the Hebrew month of Adar, the holiday of Purim (the 14th of Adar, which this year begins on the eve of Thursday, March 24), and the fact that this week we conclude the reading of a book of the Torah — which means that in synagogue, after the final words of the portion are read, the assembled say “chazak, chazak, v’nischazeik” — “be strong and be strengthened.”

The Chasidic masters would often find lessons in the words of the Torah outside their plain meaning. In our reading we learn that among the many things that the craftsmaster, Bezalel ben Uri, did in building the Tabernacle, “he coated the heads of the pillars [with silver], and bound them to the structure” [Ex. 38:28]. Rebbe Yisrael Taub of Modzhitz noted that the word coating, v’tzipah, is a cognate of the word for awaiting or looking forward to something, metzapeh. He said that there is an allusion here to G-d “waiting hopefully” for each Jewish person to “head” in His direction, to make the first steps towards Him.

Each of us must make a start, as it says earlier: “And now, if you truly listen to My voice and keep My covenant” [Ex. 19:5], and Rabbi Shlomo Yitzchaki explains, “if you accept this upon yourselves now, it will be good for you from now on, because all beginnings are difficult.” The first step is the hardest. And G-d is waiting for us to take that first step.

Every Jewish person is included in this; no one can imagine that somehow G-d does not care about him or her. Because as Rav Yitzchak Meir Alter (the Chiddushei HaRim) said, the name of the month of Adar is the acronym of “Aluf Dal Rash” — the “Aluf,” the great leader, rests His Divine Presence [even] upon the simple and lesser people, the “Dalim v’Rashim.” This is what we see in the Purim Megillah, that the King’s servants pointed out to the evil Haman that Mordechai the Jew was not bowing to him. Mordechai is referred to repeatedly as Mordechai the Jew, rather than Mordechai the righteous or Mordechai the leader. The most important thing about Mordechai was the simple fact that he was a Jew, regardless of whether he was great or lowly.

The month of Adar, Rav Biderman explains, is the time in which we remember that we must fight the people of Haman, the nation of Amalek. Amalek came and fought the stragglers among the Jews as they first crossed the Sinai desert, when no one else would dare attack them. And the entire Jewish people was told to turn around and fight them, to eliminate the hatred represented by Amalek, because every Jew is important, and every Jew is responsible for every other — including the stragglers.

This brings us to the fact that this is the closing of the book of Exodus, when we declare “be strong and be strengthened.” This happens during Adar for this is an ongoing battle. The Jews set upon by Amalek were those losing hope, and we must never lose hope, and must unite to oppose Amalek. If a person strengthens him or herself again and again, then G-d will strengthen and assist, and the person will be strengthened. We have to take the first step, and we have to keep trying, and we must look to and depend upon G-d to help lift us higher. Because if we strengthen ourselves, if we take that first step, then G-d will strengthen us!