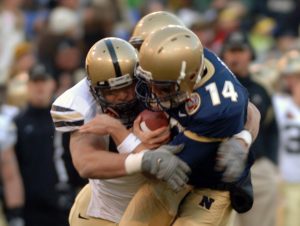 When I saw the headline for the article on Torah.org, “Murder and the Super Bowl,” I knew I had to have a look. The article is by Rabbi Yisroel Ciner, whom I’ve known for many years, long before he became Rabbi of Beth Jacob Congregation in Irvine, CA. And with such a timely headline (yes, even I know we are approaching Super Bowl Sunday), how could I not?

I thought he was going to discuss the violence of football. It’s a very rough sport, one which trains players to be physically aggressive. I’m not sure why we are surprised when we find that this violence sometimes spills outside of the stadium.

But that wasn’t his point at all.

Rabbi Shlomo Yitzchaki (Rashi) tells us that just the first word of this week’s reading contains a profound lesson. It begins: “And these are the judgments which you shall place before them.” [Ex. 21:1] Why “and”? These are the judgments! All we need is “eileh” rather than “v’eileh.”

But Rashi explains that “v’eileh” means that what follows is an addition to what came previously. In this case, we just read about the Revelation at Sinai, receiving the Torah and some of its laws. Specifically, last week’s reading concludes that one must not cut the stones of the Altar with metal tools, and to have a ramp rather than steps up to the Altar, so as not to inadvertently reveal beneath a Kohen’s robes.

Those laws are “chukim,” laws provided by G-d that are not immediately logical or well understood. The “mishpatim,” judgements, that we read this week are civil laws — the foundations of civilization. Without rules of interpersonal conduct, one has anarchy. If the Torah had not provided us these rules, then like every other nation, we would have had to create them.

But based upon this, Rabbi Ciner adds a fascinating point: that the laws created by nations are simply a “consensus of what they want according to the time, place and situation that they find themselves.” “They” must be taken to mean the ruler and the ruling class, but the point is sound. The rules made are colored by circumstance.

He gives a perfect example: what was “entertainment” in ancient Rome? Gladiator fights! A gladiator was not a soldier, he was a performer. It was the ultimate reality show, as the gladiator faced dangerous animals, convicted criminals, and other gladiators — knowing that only one would emerge alive. The “noble” gladiator murdered others for the delight of the audience. And that is what we call ancient Roman “civilization” — a society that celebrated barbarism, calling murderous fights to the death a form of entertainment.

The Romans, of course, were the ones who conquered Jerusalem and exiled the Jews from their land. According to the ways of the world, the Jews should have been assimilated into Roman society. Instead, it is the ancient Roman civilization that is gone, and the Jews who are still here. Even more, the idea of murder for entertainment is anathema to the Western world. Why? Where did they get the idea that murder is evil? Where did they get the idea that there is such a thing as good and evil at all?