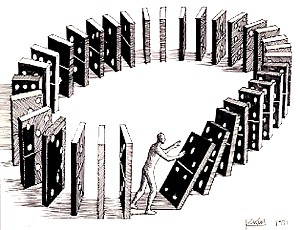 The last book of the Torah, Book of Devarim, is called “Deuteronomy” in English — an Old English translation of Deuteronomium, Latin for “Second Law.” G-d tells Moshe to record what Moshe himself said to Israel, which includes further discussion and elaboration of the Commandments.

Moshe begins, however, by giving Israel Tochacha, rebuke. In modern English we might call it a “stern lecture,” but that fails to capture its full meaning. Moshe lived his entire life as a servant of the Nation. G-d testifies that Moshe was “more humble than anyone” [Num. 12:3]. He was their leader because he was called upon to lead — and showed leadership by demonstrating, as a shepherd, concern for a small lost sheep in his flock. He cared about every person. So if he was criticizing them, it was because he truly desired the very best for them.

Even before he begins to speak, Rashi explains, the Torah describes the People of Israel’s location in a way that reminds us of places where we, Israel, angered the A-lmighty through our misbehavior. And the Torah knows a thing or two about rebuke — why does it say that he spoke “to all of Israel?” Because if only part of them were there, those out in the marketplace at the time would come back and say, “you didn’t respond when he said that? If we had been there, we would’ve answered him!” So Moshe assembled everyone, so that no one could say afterwards that they could have justified themselves but didn’t have the opportunity. And why did Moshe only do this shortly before his death? Otherwise he would have had to rebuke Israel constantly, and we would have been ashamed.

Perhaps the strongest criticism is when the Torah points out that they found themselves eleven days away from Horeb, Mt. Sinai [see 1:2]. Forty years later, they were all of eleven days from where they received the Torah.

And there is a deeper message, Rashi tells us, behind mentioning “eleven days from Horeb.” — to get from Horeb to Kadesh Barnea takes eleven days, but excluding the days when Israel stopped (due to its own actions), they traveled there in only three. That is how anxious G-d was to bring us to our land! And then at Kadesh Barnea the spies went out… and as a result, Israel traveled in a circuit around Mt. Seir for forty years.

This is a good message to be reading on the eve of Tisha B’Av, the Ninth of Av, the day both Temples were destroyed. Even the bad things that happen to us are for our own benefit — and usually because we, Israel, did something wrong. We live in a time when people refuse to take responsibility for their own actions, and we are taught to take responsibility beyond what even seems logical: “every generation in which the Temple is not rebuilt, it is as if it was destroyed during their time” [Yerushalmi Yoma 1:1].

Today there is a terrible disconnect between cause and effect — by which I mean spiritual cause. 78% of Jews in America told the Pew report that “remembering the Holocaust” is an important part of being Jewish. But where are they on the ninth of Av? On Tisha B’Av, we remember terrible things that befell the Jewish People, and remind ourselves that it is ultimately up to us to do better, to honor the memory of the holy martyrs of our nation by coming closer to G-d and being truly deserving of peace in our land.