The trail of anti-Semitism is long and bloody; irrational hatred towards the Jewish people permeated Europe, Asia and North Africa back through ancient times. Nonetheless, one should not be overly hasty to fall back upon ancient biases in the modern era.

It does not make sense to resort to charges of anti-Semitism in response to positions and activities against the Jewish state, when there are other reasonable explanations that justify the same positions. Supporters of Boycott, Divestment and Sanctions (BDS), and the recent Flotilla trying to break the naval blockade of Gaza, assert that they are motivated by humanitarian concerns for the residents of the Gaza Strip, rather than animus towards Jews or Israel. These motivations include:

The question we must ask is simple: are these neutral humanitarian concerns, or excuses with which to mask discrimination? The difference is found in how these arguments are employed in other situations: one who applies humanitarian principles across the board is genuine, but one who encourages global condemnation of a single group or country — while ignoring equal or greater violations by an opposing or third party — might more accurately be called a bigot. And there’s the problem. 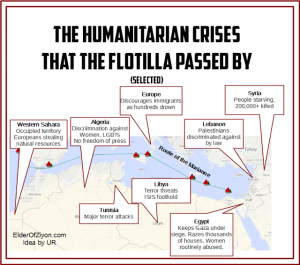 It is true that the Gaza Strip’s sole power plant is producing limited power at this time – due to the Palestinian Authority’s refusal to provide more fuel until Hamas, the organization governing the Gaza Strip, pays its past due balance. Israel, by contrast, continued to provide electrical power to Gaza even during last year’s war, though Hamas owed Israel over $60 million for previously-supplied power at that time.

Israeli electrical service to Gaza was only interrupted when an errant Hamas rocket hit the power line. Employees of the Israel Electric Company then worked in bulletproof vests and helmets in order to restore power to 70,000 residents of Gaza just days later.

And despite accusations that Israel “destroyed” the Gazan power plant during the war, that plant resumed operation within two months of the war’s end. So a neutral concern for Gazan residents would direct opprobrium primarily against the Palestinian Authority and Hamas, those responsible for cutting the power. BDS activists, however, protest against Israel.

As for medical equipment and care, we must wonder why the Flotilla bypassed Morocco, Algeria, and most notably Egypt, countries along its path where the life expectancy at birth is significantly lower than it is in the Gaza Strip. Yes, despite what you’ve heard about “genocide” in Gaza (a smear designed to stir up grotesque comparisons to the Nazi Holocaust), a baby born in Gaza can expect to live nearly three years longer than one born in Egypt — due in large part to access by Gazans to treatment in Israel (where the life expectancy of both Jewish and Arab citizens is still higher).

A neutral concern for human rights and international law would also have motivated the flotilla to dock in Algeria, where Freedom House upgraded the state of press freedom to “Partly Free” only last year, or Libya, where attempts at freedom of expression could be greeted with the death penalty — as could the announcement of an LGBT relationship (in Algeria, one would only get a few years’ imprisonment and a large fine for that). Yet the “freedom flotilla” sailed straight for Gaza — and not because hundreds of homosexual Palestinians have fled to Israel to avoid discrimination, harassment or death.

A naval blockade during hostilities is a conventional defense tactic, and Israel claims the Gaza blockade will end as soon as Hamas ceases its efforts to import weapons with which to kill Israelis. This argument is buttressed by the interception of a shipment of advanced Syrian rockets, paid for by Iran and intended for Hamas use, just prior to the outbreak of last year’s war. But under European Union law, Spain has no similar justification for its summary deportations of refugees who jump the fence from Morocco to the Spanish enclave of Melilla. Yet the Flotilla did not stop there to protest this undisputed violation of international law, nor suggest that Hamas cease attempting to import weapons as a method with which to end the blockade.

Discussion of the “security of food supplies” is also a troubling subject for BDS supporters to raise, as Israel continues to facilitate entry of 800 truckloads of food and humanitarian supplies into Gaza every day. These imports halted only briefly during the 2014 Gaza War, when Hamas deliberately fired rockets at the border crossing. Egypt, on the other hand, has closed its border with Gaza completely, and is razing an entire city — the Egyptian side of Rafah — to prevent terror attacks against its soldiers. Yet again, the Flotilla accuses neither Hamas nor Egypt of indifference to Gaza — only Israel, the only one of the three that has acted reliably and consistently to ensure the security of food supplies.

As for cultural exchange, it’s interesting to note that neither the Palestinian Authority nor Hamas will tolerate the presence of an Israeli Jew in any territory under their control, whereas, by contrast, Arab citizens of Israel enjoy greater freedoms than Arab citizens of any Arab country — including mixed Jewish-Arab schools, Arab professors and students in Israel’s top universities, Arab Knesset members, and even a leading contestant on MasterChef Israel. A Palestinian in Lebanon is barred from at least 25 professions, including law, medicine and engineering, but BDS does nothing to protest open discrimination against Palestinians by other Arabs.

And when it comes to self-determination, the flotilla sailed past Morocco, which continues its occupation of the Western Sahara and control of the indigenous Sahrawi people. Palestinian Arabs comprise the majority of the citizenry of Jordan — itself eighty percent of the old British Mandate for Palestine. Yet, once again, the flotilla does nothing for the independence and self-determination of millions of ethnic Palestinians languishing under the Hashemite clan (originally of Saudi Arabia).

So yes, let’s not be so fast to say that BDS and the recent flotilla are nothing more than a recent manifestation of age-old anti-Semitism, reminiscent of the Nazi Boycott of the 1930s and false incitement against Jews throughout the Middle Ages. Let’s offer the proponents of BDS the opportunity to provide new and more reasonable justifications for their positions and actions that are neutral, humanitarian, and have nothing to do with bias against Jews.

Because the ones provided thus far have done precious little to prevent us from slipping inexorably towards that ugly conclusion.

* As the Washington Post determined, the “aid” comprised a flat package able to hold a small solar panel, and a single nebulizer.