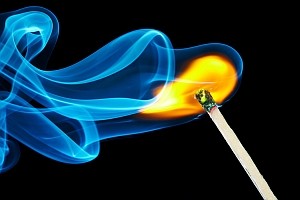 In this week’s reading, Aharon is Commanded to light the Menorah in the Temple.

What happens when you light a flame? Lighting a second candle takes nothing from the first one. Doing so merely spreads the light, adding to it.

We read in Proverbs (20:27) that “The light of HaShem is the soul of man.” We are to not only to light candles… we are supposed to give light to souls, as well. Rav Asher Z. Rubenstein zt”l pointed out that G-d doesn’t need our help, in this as in anything. But He wants us to take part in spreading the light.

The Commandment is to light “until the flame burns by itself.” It is not enough to simply see a little spark of light; the job isn’t completed until the light is able to burn brightly by itself — and able to “pay it forward” and ignite other flames as well.

We should all do our part, every day, to light the lights not only within ourselves, but others.