Here we are, at the Shabbos preceding Purim, and what are we going to read about? Lighting the Menorah! Of course, the Torah reading concerns the lighting of the original Menorah by Aharon and his descendants in the Tabernacle and Temple, but it’s still somewhat disconcerting when Torah thoughts about “lighting the Menorah” are published at Purim — except that turning things upside down is in the spirit of Purim, after all. 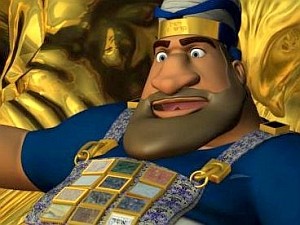 Chanukah and Purim are the two Rabbinic holidays on the Jewish calendar. What they share in common is that the rabbis perceived, in both of them, an existential threat to the Jewish people. The Greeks prohibited Torah study, circumcision, Sabbath rest and other Jewish observances, while Haman simply plotted to kill us all.

Both of them, however, began in the same place: with a repudiation of the Jewish G-d.

Megillas Esther does not begin with Haman’s elevation as chief advisor to the king, but with the huge feast made by King Achashverosh for all his subjects. Why did the king make this feast? Because, by his (mis-)calculation, seventy years had elapsed, and the Jewish exile had not ended.

He and his advisers knew the Jewish prophets had predicted exile. But they also knew that the prophets had said that this exile would last only seventy years, after which time the Jews would be permitted to return to their land. His feast was a celebration of the “fact” that the Jewish prophets had been proven wrong. This is why he dressed himself in the raiment of the High Priest, and used vessels from the Holy Temple to serve his guests. Only once it was clear to him that the G-d of the Jews had (ch”v) abandoned them, could he contemplate their annihilation.

The Greeks were the same, but they just approach the “Jewish problem” from the other side — divorce the Jews from their G-d, they said, and there will be no more Jews.

Both the Greeks and the Persians were right: the survival of the Jewish nation depends upon our attachment to G-d, both physically and spiritually. During the period leading up to Chanukah, faithful Jews were able to overcome all obstacles and reestablish the Torah’s preeminence over the Jewish nation. On Purim, the Jews rededicated themselves to G-d and Torah, and G-d saved them from danger. In both cases — whether the danger facing us is physical or spiritual — rededicating ourselves to G-d and Torah is what will guide us through.