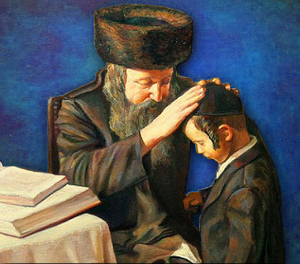 Yaakov blesses all of his sons before he dies. But before this, Yosef takes his sons Ephraim and Menashe to see their grandfather, who gives them a special blessing — first and foremost, by elevating them to have the same status as his own children. Throughout the rest of the Torah, the tribes of Ephraim and Menashe are similar to any of the others. In the desert, the new nation of Israel traveled with the descendants of Levi in the center, with the Mishkan (Tabernacle), while three tribes camped in each of the four directions around them. The tribes of Menashe and Benyamin joined under the flag of Ephraim, to the West. In the Land of Israel, each was allocated a separate region of the country.

Even more so, Yaakov excludes any future sons of Yosef from his blessing. On the contrary, he says they will be absorbed into the tribes of their older brothers. Why — what makes Ephraim and Menashe so unique?

Rabbi Shmuel Hominer zt”l explains that unlike the children of Yosef’s brothers, Ephraim and Menashe grew up in Egypt, surrounded by idolatry and impurity. Instead of living in the Land of Israel, with their grandparents, uncles, aunts and cousins all dedicated to continuing in the way of their forefather Avraham, the honored guests in their home were government officials, Pharoah’s magicians, those given prestige by the surrounding society.

When Yaakov came down to Egypt, he discovered that Ephraim and Menashe had not been drawn away from the path of their forefathers. They were not influenced by the idolatrous society around them. On the contrary, he recognized that they had clearly learned from their father, Yosef HaTzaddik, the righteous Joseph, to follow the path of Torah.

It is obvious that for them to have achieved this level was not accomplished easily. Their life was no bed of roses. There were many very serious tests of their commitment along the way, and they could certainly have turned out very differently. Nonetheless, they clung to what they learned from their father, and not all those around them.

This is why Yaakov singled out Ephraim and Menashe — so that all of us should similarly be blessed to follow a different path, no matter what society says. What society believes is worthwhile or honorable, and what the Torah says, can be two profoundly different things. And each of us must seek, and be blessed, to follow the Jewish path in all our ways.