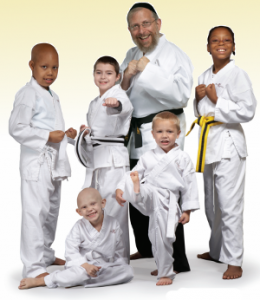 Have you ever heard of Elimelech Goldberg? Don’t worry, I hadn’t either. [Dr. Elimelech Goldstein, the volunteer medical director of Hatzalah of Baltimore, is a friend and former roommate, but that’s another story entirely.] But if you’re familiar with the Orthodox community, you’ve surely heard of the Chai Lifeline organization, and their incredible Camp Simcha for children with cancer and other life-threatening illnesses.

Rabbi Goldberg was, for many years, the director of that camp; his first daughter, Sarah, passed away at age 2 after fighting leukemia, so he had a powerful bond with children fighting illness. And he is also a black belt in a style of martial arts… one that you’ve probably never heard of either. But that’s relevant, so bear with me please.

A South Korean man named Kwang Jo Choi was a leading instructor in Tae Kwon Do, which is probably more familiar (and if not, it’s the South Korean version of Karate). He moved to North America in order to find orthopedists to help with injuries suffered as a result, which, he learned, were caused by the way he was performing martial arts. So he created a new style, called Choi Kwang Do, which incorporated techniques which he had learned from his rehabilitation exercises — including breathing and stretching exercises which help a person to combat pain.

CNN? Well yes, you’ve heard of CNN. And for the past seven years, the CNN network has identified and nominated ten people as “CNN Heroes: everyday people changing the world.” This year, Rabbi Goldberg is one of the nominees, giving us the opportunity to highlight the outstanding way in which he is changing the world for the better.

I hope you will join me, as I vote for Rabbi Goldberg to be the CNN Hero this year. You can vote once per day, with each of your email addresses and with Facebook, through Nov. 15. Both because of his outstanding work and the way it will help his organization (and by extension, Chai Lifeline and Camp Simcha), he deserves our support!