We are about to enter the period of time called the Nine Days, the beginning of the month of Av. The Ninth of Av is the tragic day when Israel mourned needlessly after the the evil report of the spies [Num. 14:1 ff.]. G-d said that because we mourned for no reason, that day would become a day of mourning. And so it has been, as by the time of the Mishnah it was the anniversary of five tragedies:

Since then, many other catastrophies have been associated with the Ninth of Av: Pope Urban II declared the first Crusade to Jerusalem, which led to the destruction of entire Jewish communities in Rhineland and France and the loss of many thousands of lives; Jews were expelled from England, France and Spain (on or around the ninth); Germany entered World War I, which resulted in 120,000 Jewish casualties and set the events leading to the Holocaust in motion; Heinrich Himmler secured Nazi approval of the “Final Solution;” and the deportation of Jews began from the Warsaw Ghetto.

Even more recently, the Jewish community center in Buenos Aires was bombed on the tenth of Av (the Temple continued to burn into the tenth, and thus it is connected to the mourning as well). And less than ten years ago, the tenth of Av began the infamous “Disengagement” from Gaza, which led directly to Gaza becoming the largest terrorist base in the modern world and to what is arguably the longest ongoing war crime in modern history, the firing of over 12,000 missiles aimed at civilians. 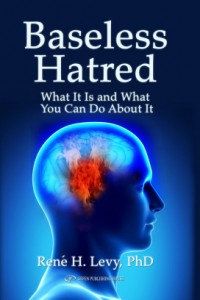 What can we do? We are told that the Second Temple was destroyed due to needless hatred between Jews. This is a time to focus our energies on increasing brotherhood and love between members of the Jewish people, especially keeping in mind the situation facing those of us who live in the Holy Land today.

Dr. Rene Levy, a neuropharmacologist in Seattle, recently sent me a copy of his book, “Baseless Hatred: What It Is and What You Can Do about It.” It could not be presented to you at a more appropriate time. It is a comprehensive study of the phenomenon of needless hatred, with suggestions for prevention and repair.

The book looks at hatred as a topic of intellectual study, increasing our awareness of the issue and, at the end, inspiring us to do better. It looks at the understanding of hatred by psychologists, neurobiologists, and of course our Sages. An entire section is devoted to Israel and the Jews, referring to the hatred of the State of Israel and the “new anti-Semitism” (it is worth noting in this context that Dr. Levy grew up in France, and received his BS in Pharmacy from the University of Paris before moving to the United States to study for his PhD). It received favorable reviews from not only Harav Shlomo Maimon, the head of the Rabbinical Court of Seattle, but a series of professors, Israeli politicians, columnists and others. In the truest spirit of brotherhood, there is something in this book for every reader, to be both informed and inspired. You are invited to read more about the book (and learn where to buy it) on its website.

For a more traditional, “mussar” (ethical) approach to increasing love and harmony, one can turn to books such as “Ahavas Chesed” (lit. the love of kindness) by the Chafetz Chaim (Rabbi Yisrael Meyer Kagan) among others. May our study of love over hate turn to practice, and bring us to the time when, we are promised, the Ninth of Av will be known as a day of joy, rather than tragedy.