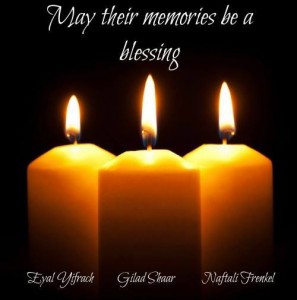 Many words have been written, and many more will be, about this awful event. But of all the things that were said, a brief comment to Twitter by Rabbi Steven Burg, Head of the Eastern Division of the Wiesenthal Center, summed it up best: “The world does not understand that this is not political for Jews. This was deeply personal. We all loved #EyalGiladNaftali.”

In this week’s reading, the evil prophet Bila’am comes to curse Israel, and is forced to sing its praises instead. As he looks upon Israel, he says, “… they are a nation that dwells apart, and are not counted among the nations” [23:9]. Israel is not like other nations. When three boys are kidnapped, they are not someone else’s children — they are ours.

And then later, he speaks of us as one: “How goodly are your tents, oh Jacob, your dwelling places, oh Israel” [24:5]. We are all one. When three boys are killed, the entirety of Israel is wounded.

Rebbe Yochanon says in the Talmud [Sandhedrin 105b] that from these words of blessing, we can perceive the curse that lay in Bila’am’s heart: he wanted to pray that Israel not be given houses of study or prayer. He knew that only without them could Israel be defeated.

Traditionally, when a life is ended through murder, we say “may G-d avenge his death.” It is a sad demonstration of the widespread ignorance of Judaism, not to mention a backhanded insult to Israelis, that the “Forward” newspaper wrote that “‘may G-d avenge his death’ is often invoked at the burials of Israelis slain by Palestinians,” as if it were a call to violence or fraught with political meaning. In reality, exactly the same sentiment is traditionally voiced with regards to those killed by the Nazis, during the pogroms, and throughout our long and often painful history — the perpetrators of which are, of course, long since dead.

The ultimate vengeance for their blood is not further killing, but survival and growth. When we go into the house of study, that is our vengeance. When students around the world learn the six orders of Mishnah, that, as one survivor said regarding his grandchildren, is the best revenge against the Nazis. We do our part, and let G-d take care of the rest.

One of our great Sages, Rabbi Chaim Kanievsky, is said to have remarked, after a few moments of stunned silence upon hearing of their end, that these boys had a tremendous merit — they brought us together to pray, to improve ourselves, to elevate ourselves in response to barbarity. May it continue to be so.