At this writing, we are anxiously awaiting the rescue or release of the three boys kidnapped by terrorists, Yaakov Naftali ben Rachel Devorah, Gilad Michael ben Bat Galim, and Eyal ben Iris Teshurah.

All over the world, Jews have set aside their differences to pray for these three boys. At the Knesset, perhaps the focal point for disagreements between Jews, all the Jewish representatives said Psalms together. 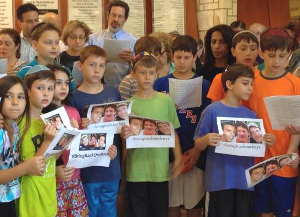 Why does it take an event of this magnitude to unify us?

This week’s Torah reading focuses upon Korach, who led a rebellion against Moshe. What could be a more ridiculous idea? Everyone knew that Moshe was appointed by G-d and had led them out of Egypt. As mentioned last week, the Medrash even tells us that everyone had the opportunity to hear the Commandments directly from HaShem, but each time He spoke, their souls left their bodies. They were unable to hear Him directly, though Moshe could — which is the best indication of Moshe’s purity of thought and intent. It was the Jews themselves who turned to Moshe and asked him to transmit G-d’s message; for Korach to now turn around and claim that Moshe was changing the rules for his own benefit was both absurd and deadly.

For Korach and all his followers, it was all about their personal honor and benefit. They didn’t get the positions they thought they “deserved,” and so they acted out of jealousy. They were wrong, and as we see, to act upon their feelings certainly wasn’t worthwhile.

Whether or not a person is in the right, taking it personally is never worthwhile. The problem is that it’s difficult, in the heat of the moment, to remember the brotherhood between us that is more important than any argument we might be having. A story I heard this week from Rabbi Dovid Eisenberg illustrates this point nicely:

After someone passes away, there is a Jewish custom to accompany the body until burial. This means that even overnight, people stay with the deceased, as arranged by the Chevrah Kadisha, the burial society.

In one community, there were two people who had been in an argument, and never reconciled. For two decades they lived in the same community, sent their children to the same schools, saw each other in synagogue, at weddings, etc., and never spoke.

Then someone in the community passed away, and the person with the Chevrah Kadisha who arranged the shemirah, the watching of the body, was unaware of the argument between these two men. So he scheduled both of them to share the same shift, to watch the body at the same time.

So the two of them found themselves in a room, with just each other and someone who had passed on. They were confronted with the realization that all of us are, like the deceased person they were watching, headed to the World of Truth after our time in this one.

That one scheduling error caused a twenty year argument to disappear.

As a merit for Yaakov Naftali ben Rachel Devorah, Gilad Michael ben Bat Galim, and Eyal ben Iris Teshurah, may we all find an opportunity to reconcile our differences, and commit to remembering this without another tragic reminder.