Upon the inauguration of the Mishkan, the Tabernacle, the leaders of each of the Tribes of Israel, the Nesi’im, brought gifts to be offered as sacrifices. We read the details of the gifts offered by each of the twelve, and immediately realize that the Ba’al Koreh, the Torah reader, had an easier job preparing that we might have thought — because besides the names of the tribes and their leaders, essentially the same six verses are repeated twelve times. Each one of them brought precisely the same gift. 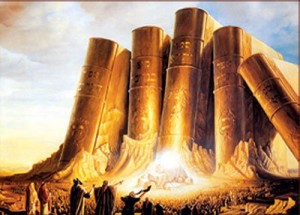 Rabbi Shmuel Greineman writes that this is no coincidence. On the second day, Nesanel ben Tzuar of the tribe of Yissachar had to make a decision. What would he do differently than Nachshon ben Aminadav of Yehudah? Each of the remaining ten, of course, would then have to decide how to vary from the earlier ones, inevitably leading to jealousy as each one felt compelled to upstage those who gave previously. So he chose instead to let Nachshon’s gift serve as the template which they all followed. G-d found this so gratifying that He had all twelve gifts recorded in the Torah individually, although they could as easily have been stated collectively.

This week’s reading, Naso, is universally read either immediately before or after the holiday of Shavuos, when the Torah was given, when the entire Nation gathered around the mountain “like one person with one heart.” The gifts of the Nesi’im teach us the importance and greatness of unity. The Torah, with its “seventy facets,” is not a prescription for anarchy. On the contrary — the depth of Torah provides abundant lessons all leading us in the same direction, to bring G-dliness into the world and share it with the next generation.