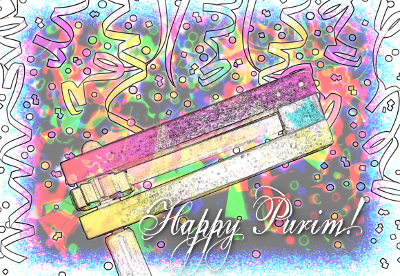 One of the recurring themes of the Book of Esther is that what we see, what we may believe to be obvious, may be quite the opposite of reality. The very name “Esther” (whose original name was Hadassah) means “hidden” — similar to the verse we find in the Torah, when G-d says “Hasther Astir es panai” — “I will surely hide My face” [Deut 31:18] when the Jews turn away from G-d. The very presence of G-d is hidden throughout the story of Purim, and His name is never mentioned in the Megillah. Instead, when reference is made to “the King” rather than “King Achashverosh,” the commentaries often explain that there is a double meaning: both Achashvesrosh, and the King of Kings.

When we read the Book of Esther, what reason do we see for the King’s decree authorizing the annihilation of the Jewish people? The obvious blame falls upon Mordechai, the scholar. Haman, the King’s closest advisor, walked through the streets and expected everyone to bow before him. Mordechai alone refused to bow, because Haman wore an idol around his neck. How foolish! How extremist! Isn’t it obvious that Haman wanted people to bow to him, not the idol? And because of his obstinate behavior, Mordechai got Haman so angry that Haman planned to kill off not just Mordechai, but all the Jews.

But that, say our Sages, is the opposite of the true cause. It was not Mordechai’s actions that nearly brought about a catastrophe still greater than the Holocaust (for there were no Jews who were not under Achashverosh’s rule), but the behavior of those who did not listen to him!

The Megillah begins with the great party thrown by Achashverosh. This is included not simply because it precipitated the death of Queen Vashti, and thus set the stage for Esther to become Queen. Rather, this party was to celebrate Ashashverosh’s power, and the fact that G-d had abandoned the Jews. Our prophets had foretold a seventy year exile, and Achashverosh miscalculated at what point the seventy years began. By his calculation, the time had elapsed and the Jews had not been redeemed. This is why he showed up wearing the holy vestments of the Kohen Gadol, the high priest, and used the vessels taken from the Holy Temple as the serving utensils at the party!

Mordechai said that no one could go to this party, that it would indicate disloyalty to G-d and lack of faith that He would fulfill his promise. But most of the Jews said, how can we express disloyalty to the king? He promised kosher food, and that no one would have to eat or drink anything they didn’t want to consume — so not going would be ungrateful as well. And so they went. And this, the Sages say, is what actually set the stage for their destruction. What saved them was when they admitted their error, even missing the Passover Seder to fast, as Esther commanded Mordechai to tell them to do.

Sometimes things can appear to be very obvious, yet the truth is just the opposite. Without looking deeper and turning to wise counsel, we could make a terrible mistake. “Venehapech Hu,” “it was all reversed,” doesn’t just refer to Haman’s decree — it means reality may be the opposite of what we perceive!