When the Egyptians pursued the Israelites that they had just freed, the Jews were very afraid. They turned to Moshe and said, “was it due to a lack of graves in Egypt, that you took us out to die in the desert?” [Ex. 14:11] From which we learn that sarcasm is an ancient Jewish tradition. 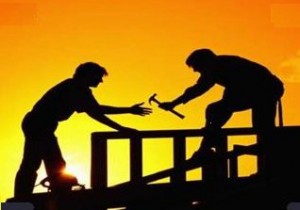 Moshe reassured them, and said that G-d would fight for them, they just have to be quiet. And then in the next verse, G-d says to Moshe, “why are you crying out to me? Speak to the children of Israel that they should go forward.” [14:15]

Rashi says that this tells us that Moshe was praying — that after reassuring the Children of Israel, he turned to G-d and prayed for help. And G-d told him, this isn’t the time for long prayers, Israel is in distress! Moshe needed to be reassuring the Children of Israel, and implementing practical solutions to get them out of trouble. While it was certainly true that only Divine Mercy saved them, the needs of others required that Moshe spend his time making efforts on their behalf, rather than praying for G-d’s help.

When I was a yeshiva student, there was a fellow who lived in the neighborhood who was a consistent supporter of the yeshiva (Ohr Somayach Monsey) whose daughter got married. So the yeshiva hosted a celebratory meal (called a “Sheva Berachos,” after the “Seven Blessings” said after each such meal held during the week following the wedding). And as we were eating, one of the rabbis got up to speak. “I have to tell you something about Joel here. Joel isn’t too frum. He’s not too religious.”

Now how could he say such a thing about a fellow out celebrating his daughter’s wedding, in the middle of a religious institution? He explained. “When a poor person comes to his door, Joel doesn’t say ‘G-d should help you’ or ‘G-d will provide.’ He opens his wallet!” Joel knew when it was time to pray, and when it was time to work to help someone in distress.

It has become well known that, sadly, Jewish communities did not do everything they could during the Holocaust, even once they learned the true extent of the atrocities committed during that time. Every generation has its fights and trials, and ours is fighting a wave of assimilation that threatens to decimate the Jewish people all over again. The way forward is to share Jewish knowledge. Are we doing everything we can?