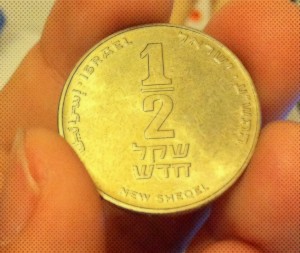 When it came to constructing the Tabernacle, everyone was invited to contribute as much as he wanted. Since not everyone has the same financial portfolio, it’s obvious that some people ended up giving more than others. In fact, we are told that the leaders of each tribe made a mistake. They said they would cover whatever was lacking, rather than giving immediately — and then the Bnei Yisrael gave more than was needed. This is why the leaders came at the end to bring the Shoham stones, the precious gems on the breastplate worn by the High Priest. Everything else had already been given!

In this week’s reading, we find a different plan. For the annual upkeep of the Temple, each adult male gave a 1/2 shekel coin — exactly the same amount.

There is an obvious message here: every individual has something to contribute. Every member of the Jewish people is part of a greater whole, and no one should think he or she is irrelevant.

Our teacher R’ Shlomo Katz, in his HaMa’ayan class, points to a comment of R’ Moshe Feinstein zt”l. R’ Moshe says that a person can think that he doesn’t really know much, and can’t learn like a great scholar, so it doesn’t matter if he studies or not. He can think that he’s really not a powerful or influential person, so it doesn’t matter if he goes out of his way to do a good deed.

This, says R’ Moshe, is why the opening verse [Ex. 30:11] begins, “When you raise the heads of the Children of Israel according to their numbers…” By counting them, Moshe is told, you are raising their heads. Each person is significant, and has much to contribute. Each individual is obligated to learn and do good deeds, like everyone else. Tap your potential, and you’ll find you’ve been given more than you thought!