Skip to content
At the beginning of this week’s reading, Pharoah flatly rejects the idea that all the Jews should be allowed to leave Egypt to worship G-d. He was willing to consider allowing a subset to leave for a time, but not the entire nation. Yet that is precisely what Moshe demanded, and at the end, of course, that is what happened. Moshe was unwilling to leave anyone behind.

This week, the world of Kiruv, Jewish outreach, lost a true hero. On the way to the conference of the Association for Jewish Outreach Professionals, the car in which Rav Dovid Winiarz zt”l was travelling slid on a patch of black ice, and he died in the accident.

Reb Dovid was a person who believed in the ideal of leaving no one behind, and who lived for that ideal.

He used social media as his vehicle of choice, even adopting the moniker “the Facebuker Rebbe” for his activities. And like any Rebbe, he was there for any Jew with words of advice and inspiration.

He epitomized what outreach is really all about: Ahavas Chinam, love for every person regardless of circumstances. Helping a Jewish person discover the majesty of our Jewish heritage isn’t about saving souls; it’s another aspect of the concern for others we are supposed to demonstrate in all circumstances. Dovid was concerned for others, in every way.

You saw it in the way he did business. He was an agent for Fidelity Payment Services, a popular provider of merchant transaction processing. You saw exactly the same caring person helping his clients as you did in his outreach. The CEO of Fidelity, Benyamin Weiser, mentioned to me that R’ Dovid had a uniquely soft approach in both sales and service, which he attributed to his outreach work, but I feel was simply the essence of who Dovid Winiarz was.

Someone wrote on Facebook that he wanted to hear from R’ Dovid’s close friends about doing something in his memory. I sent that person a note, telling him that he’s going to receive a lot of messages (as I’m sure he did) because everyone felt he was R’ Dovid’s close friend. His enthusiasm was infectious, he was always trying to get more people involved in spreading Judaism, and simply helping others in whatever situation. In just days, hundreds of people have joined the tribute page set up on Facebook in his memory, with countless stories of what he personally did to help so many. One person commented that everyone knew R’ Dovid was a Tzaddik, a truly righteous person. What was hidden about his holiness is that no one knew the superhuman amount that he did for so many people.

As I wrote earlier this week, if we are to learn from R’ Dovid, it would have to be first and foremost his attribute of Ahavas Chinam, free and boundless love for others, that we emulate. Spreading knowledge of our great legacy should be merely one facet of that desire to help.

Rav Dovid Winiarz is survived by his wife and ten children; a fund has been established to help the family.

On Yom Kippur, we are invited to “clean the slate” of all the misdeeds of the past year.

In a way, it’s like hitting the reset button.

When we restart our computer, all of the old programs that were sitting there, using memory and slowing down the machine, are cleared away. This is the time of year when we’re granted a special opportunity to reboot our lives, to start over without the baggage of bad habits. It’s a time to examine which of our “running programs” are positive, and which are simply slowing us down.

It’s also a time when we have a clear connection, when G-d declares that His Presence is especially close to us, to help us to move forward.

I hesitate to add this, or name the Rabbi who came up with it, but it’s a great time to get rid of “a virus.” [Aveyros are sins, and if pronounced like someone from the Hungarian or Galician Jewish community, it comes out ahvayris.]

So it’s important to not simply go to synagogue tomorrow… but to take stock of our lives. After a system restart, a computer runs faster and cleaner, and is more productive. Yom Kippur gives us a special, once-a-year opportunity to restart how we live, in much the same way.

These are two of my more popular (commonly “retweeted”) entries about current events.

Were he alive, Joseph Goebbels would be invited by UN Human Rights Council to join Gaza inquiry. #IsraelUnderFire @HillelNeuer

Aiming missiles at my daughter is a symptom of nothing but the desire to murder Jews. #Israel #Hamas #Gaza

It’s rare that I simply refer to another article, but “I am Orthodox, and Orthodox is me” speaks for itself. I think the piece is stronger because the writer is both relatively unknown, and a woman. She truly speaks for us all when she says “those stereotypes about ‘the Orthodox’ are talking about me.”

Tablet magazine carries the story of Isaac Theil (which is on the NY Daily News, as well), who was innocently riding home to Brooklyn on the Q train when a young black man (tired from a long day at college, it turns out) fell asleep on his shoulder. For 30 minutes. Theil’s response? “He must have had a long day, let him sleep.” Theil thought nothing of it, got off at his stop and went home. 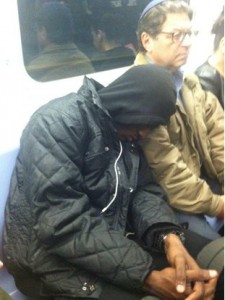 Not so, the passenger across the way, who thought this was an incredible act of kindness. He or she snapped a photo and posted it to an Internet sharing site, where it became an overnight sensation — nearly 5,000,000 views and counting.

I hope other people are also kind of wondering why this is such a big deal. I’m pretty sure the same has happened to me, and the most I would do is try to move him without waking him. Wouldn’t you be embarrassed to wake somebody up? It’s just that we are told to be careful about gezel shayna, disturbing someone’s sleep.

It reminds me of a letter that was in Ami magazine last week, from a Rabbi Yehoshua Ottensoser of Lakewood who is the Judaic principal of a school in Yardley, PA. He needed something notarized, and found a place in Yardley that had a notary public on the premises. The notary took the documents and prepared to stamp them. The Rabbi looked at him and asked, “don’t you want ID?”

The notary responded, “of course, but aren’t you a Rabbi?”

As Rabbi Ottensoser said, our communities “have had our share of self-inflicted black eyes.” The media has a field day every time a Rabbi or visibly Orthodox Jew is accused of wrongdoing, and we may even think ourselves that we have completely failed to create a positive perception of our world. As he wrote:

But then there are the bike-riding employees, cab drivers, bus drivers and of course notary publics, the simple average Joes (or Ahmeds) on the street who still very much believe in us and generally only think of us as people of a higher calling who can be unquestionably trusted and even asked to pray on their behalf.

We still are, by and large, the type of people who will help restore even a New Yorker’s faith in humanity. And if we live our lives remembering that we might become the next viral sensation for doing the right thing, rather than the wrong thing, that should prompt us to try to make the right choice at each and every moment.

I was on BBC World News yesterday; the topic was religious leaders having lavish lifestyles, after the suspension of the “Bishop of Bling” in Germany. They considered me a great expert on rich rabbis, apparently.

No, no relation! Peter Menkin is an Episcopal writer, and this article appeared in the San Francisco Examiner and the Church of England Newspaper. Interesting style and all, you do learn a lot about Project Genesis via this article — so with his permission I’ve reprinted it here.

In an interview on Religious Education, Orthodox Rabbi Yaakov Menken talks of his work with the successful teaching website www.Torah.org and tells readers all about what to expect as students

This is the second interview in three that constitute the final article-interview on Religious Education. The unique aspect of this interview has to do with the success of internet education and its use in the teaching of Torah and Jewish learning purposes, as well, of Orthodox Jewish adult education. In this interview with Religion Writer Peter Menkin, Director of www.torah.org spoke with the writer over a period of a few months, from December, 2011, through the 20th of March, 2012. Rabbi Yaakov Menken (no relation to the Religion Writer), speaks with an authority born of education, training, and experience. He shows a love of learning, and like the other three Rabbis who are part of this interview series of three about the internet learning site, with its 78,000 subscribers, Rabbi Yaakov has a warmth for the reality of the work and their experience in reaching out to both Jews and non-Jews in many parts of the world–in fact, worldwide as well as the United States. The phone conversations held from Peter Menkin’s home office in Mill Valley, California to Rabbi Yaakov’s office at www. Torah.org and his own home in Baltimore, went well.

1. Peter Menkin: There is little doubt in my mind that your work as Director, www.Torah.org is an internet success with 78,000 subscribers. In a conversation by phone, you talked some about advantages and such of internet learning—calling Torah.org a place for ongoing education (lifelong learning). To paraphrase your remark regarding continuing education –as this writer knows it as once known in California, USA — and your school purpose, continuing education is…much closer to our model, not because (the student is) going to get a credit. Lifelong education known to us as… religious study…a more fundamental obligation. It is one of the things we are expected to do. Tell us about this lifelong, fundamental obligation. Give us some about the, “Why,” and “What for…”

END_OF_DOCUMENT_TOKEN_TO_BE_REPLACED 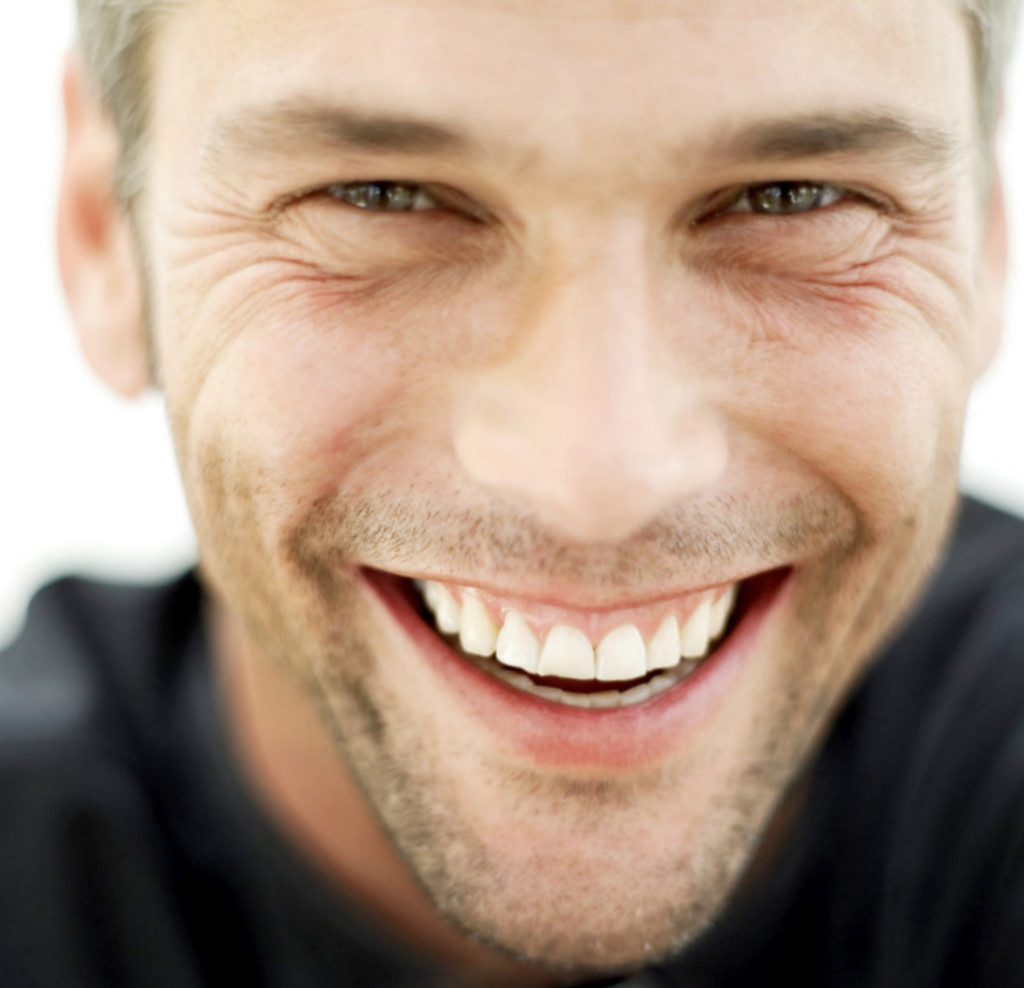 The blessing Jacob gives Judah concludes with the words: “his eyes will redden from wine, and his teeth white from milk.” Rabbi Yochanan says homiletically (Kesubos 111b) that you can read it as “teeth whiter than milk” — to give a smile to a friend is even greater than giving him nourishment.

When someone comes collecting charity, it is a difficult and often thankless job. Rejection can break a person’s spirits and keep him or her from continuing, no matter how important the cause. So, as it happens, a smile may be one of the most important things you can give — you can brighten that person’s spirits and enable him or her to persevere.

Closer to home, there is no one who doesn’t have a “hard day” now and then. There are great people who have tremendous internal reserves of happiness, so that no matter what, it seems like they are always happy. Even people like that need an encouraging word now and then — much less the rest of us, who sometimes just want to crawl back into bed and start over tomorrow, if not next week!

I decided that it was time for me to take advantage of this space to start a discussion. My posts here will be short notes of interest — in contrast to my participation in Cross-Currents, for example, as well as a brand-new blog from my Internet work.

But I thought it worth keeping the site more lively — primarily so that readers out there (does that mean you?) should feel free to comment and know that I’m reading!